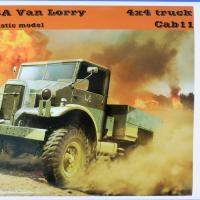 The 1/35 scale CMP F15A Van Lorry by Mirror Models is a challenging build due to lack of clarity in part locations, but experienced modelers can build it into a nicely detailed model.

The kit comes nicely packed in a cardboard box, and each of the gray plastic sprues are individually bagged. On first glance there are many very small parts, and the detail of the molding is good. The parts have very large gateways, or sprue connections, for attaching the part to the sprue. The instructions noted that some of the gates are larger to avoid ejector pin marks, and suggests using a razor saw or scalpel instead of a sprue cutter to remove the parts. The sprue connections are wide but thin, and I didn’t break any of the parts removing when removing them from the sprue.

The kit comes on light gray plastic sprues, along with one bag of clear plastic parts, one bag containing the decals, wire, and small photoetch fret, and one bag containing the four rubber tires. The photoetch sprue is quite thin and is covered with plastic on both sides for protection. The clear plastic parts are relatively thin but still quite thick for this scale.

The instructions come on four double-sided pages that are 8.25 x 11.375 inches. Instructions have eight steps, including the illustrations for three different marketing options: Canadian service German service, and British service. The instructions include a brief history of the Canadian military pattern truck. Brief tips are provided for working with the sprue connections and photoetch brass, as well as tips on glues to be used.

Construction began with building several subassemblies including the wheels, trailer hitch, oil tank, muffler and tailpipe, toolbox, gear transfer case, and engine. One of the wide sprue gateways became an issue immediately, as the two halves of the wheels have four connections each, for a total of eight per wheel. Sprue cutters did not cut the wide gates cleanly so I needed to use a razor saw, and each of the eight connections required sanding. I eventually found that clipping the parts off the sprue with a hobby knife worked best. Lots of the parts are molded quite thin and are realistic at this scale.

The wheels can be assembled and painted prior to inserting them into the tire. The tires are molded hollow and have nice detail for the lettering on the sidewall.

Bumper parts E14 and E15 in step #1 are difficult to remove from the sprue. Each of the parts has four sprue gateways on each side. I used a razor saw to cut through the gates and cleaned them up with an X-Acto blade. Some modelers might want to consider using brass strips to replace parts E14 and E15. There are two subassembly DDs, the right and left gas tanks, required in step #1, which is not clear the instructions. A wheel for a spare tire is included, but there is no fifth tire or a place to mount a spare. The photoetch parts PE1 should not be installed where shown on the instructions. They need to be installed immediately behind the fill pipe so that it is not covered by the toolbox later on.

The locating pins and holes on the parts do not seem to fit well. Many of the locating pins and tabs used by Mirror are larger than the corresponding holes. The instructions suggest using liquid cement to soften the plastic and then push the parts together; this seems to be Mirror’s approach to getting a tight fit of the parts. There is a fair amount of cleanup of the parts due to the wide sprue gateways and some minor flash on the edges of parts.

Step #2 builds subassemblies for the muffler and exhaust pipe, storage boxes, transmission transfer case, engine, and the rear part of the body. There is no part number given for what appears to be the cap on the oil-fill tube. There is a small part on sprue A that I assume is the correct piece. It is not numbered on the sprue either, but it is the only piece left.

Three gauges of wire are provided in the kit: .3, .5, and .6 mm. The bed of the truck uses wire for the hinges and handles on the storage boxes. I came up a little short on the .3 mm wire and had to use some spare material. Mirror seems to have mis-numbered the parts for the storage boxes, but it's easy enough to figure out from the parts.

Step #3 assembles the front fenders, firewall, and interior of the truck. This kit uses the cab 11 style. Many of the CMP lorries removed the tops and windshield of the vehicles, particularly when used with antiaircraft guns in the rear bed. This was also done in some of the reference photos of the trucks that had been captured by the Germans. I glued together the rear, the cab roof, and windshield but did not glue them to the body.

The body parts generally go together well, but the instructions are a little unclear, so refer to the subsequent diagrams to see where the parts get installed. There is a part of the dash, H12, that PE11 and PE19 attach to. This part is not labeled on the instructions, but is part H12. The correct installation of the inner fenders, parts H4 and H3, is a little unclear, but referring ahead to the next step and installation of part H7 will help.

In the last part of step #3, the grill piece PE5 did not seem to fit at all into the opening. I had to trim the vents on either side of the grille to get them to fit.

Step #4 begins the assembly of the front rear axles and chassis. Lots of fiddly little parts here, many of which could have been molded together rather than separately, such as D1, D2, and C6, or even the axles, C5 and C7, for example. Again, the mounting locations for many of the parts are not clear, such as the frame cross members.

There is a photoetch fan blade included, however, the instructions do not show it being installed. After installing the radiator, I didn't have enough room to fit the fan in anyway.

Step #6 installs the fuel tanks, muffler, and the front bumper. There were lots of fit issues with these items. The brackets for the gas tanks are not precisely located, and it's also not clear that the gas tanks go on top of the brackets. The muffler tailpipe assembly required bending to get into shape, and the tailpipe was not long enough and had to be extended with a spare piece of sprue. Locations of the front bumper brackets, PE17 and PE18, are not very clear and end up with a weak butt joint between the photoetch and plastic frame.

The wheels are nicely cast with sidewall lettering. The tires have a center seam that needs to be sanded off, but the rubber looks realistic without additional weathering.

Minimal instructions are provided for finishing the kit, but there is a website for examples of camouflage markings. There are decals provided for Canadian, German, and British service of the trucks. The decals are quite thin and settled down nicely.

In summary, Mirror Models has provided a unique little kit that has good detail. The assembly of the kit will be challenging for less experienced modelers due to the lack of clarity in part location and difficulty removing the parts from the sprues. Even more experienced modelers should be ready for a challenging build, however, they will be rewarded for their effort.

Congratulations to Mirror Models for providing a nice little kit. Thanks to Stevens International for furnishing the review sample to IPMS/USA.