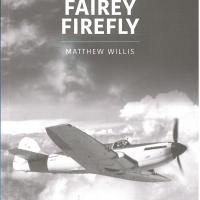 The Fairey Firefly was one of the most successful two-seat fighter/strike/attack aircraft used in WWII and beyond. While the type did have some teething problems at the beginning it proved its value across multiple theatres and two wars. The first action for the type was in Europe against the German battleship Tirpitz and then onto the Pacific against the Japanese, Later marks provided valuable service in the Korean War.

The book is divided into eight chapters, the first dealing with the use of the Firefly in WWII. Though the production Mk. I was over 40MPH slower than Fairey had promised it did prove valuable in the reconnaissance and attack roles,

Chapter two covers the post war Fireflies. When WWII ended the British had many American aircraft due to Lend-Lease. Unfortunately, the terms of this meant that to keep them they would have to be paid for so many ended up at the bottom of the ocean as they were pushed off their various carriers. The resulting gap in equipment due to this opened the door for Fairey and the Firefly. Several different versions saw service post war. At 20 pages it is the longest chapter in the book.

Chapters three and four cover the odd-looking Firefly trainer variants and those in service with Australia, Canada, India, Netherlands, and others. A nice section of photos is included.

Chapter five specifically covers the use in the Korean War. Again, a brief discussion of operations and many great photos are included.

Chapters six and seven cover the use of the type as drones and then a short section of detail photos of the Firefly. The book concludes with chapter 8 which is a brief look at preserved examples.

I recommend this book to anyone with an interest in aviation, British aviation, WWII, and Korean War aircraft as well as the modeler; all will find something of interest in these pages. This book presents a good opportunity to learn about a type that served well and long but is not as well known outside of the Commonwealth as it should be and at an inexpensive price. My thanks to Casemate for the review sample and to IPMS for the opportunity!