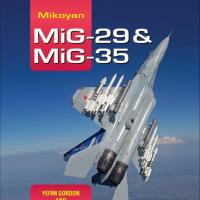 Designed as a mass-produced and relatively cheap light tactical fighter, the MiG-29 first flew on October 6, 1977. After extensive flight testing, it entered production in 1982 and deliveries to the Soviet Air Force began in 1983. In addition to its main counter-air role, the aircraft had a useful air-to-ground capability, carrying free-fall bombs and unguided rockets. From the outset the MiG-29 had been steadily developed beyond the fourth generation with changes to the airframe, avionics and weapons systems and new variants were produced in the early 2000s.

The MiG-29 known as the Fulcrum in the west, became both one of the Soviet Air Force's main fighter types and a successful Soviet export with nearly a third of the 1,500 first-generation Fulcrums built up to 1996 being exported. It saw service with 25 nations around the globe. Apart from the (former) Warsaw Pact nations, notable customers include India, Malaysia, Iraq, Yemen, Eritrea, Cuba and Peru.

This revised and expanded edition of the definitive history of the aircraft charts in detail the MiG-29's evolution from the earliest design studies to the latest multi-role versions. It includes an enormous amount of new information, a listing of known operators and production lists together with a magnificent collection of previously unpublished photos.

This is a big book, really big: 8 1/2" wide, 11" high, 2" thick, 688 pages and it weighs about 7 1/2 pounds. The pages are filled with color and black-and white images, line drawings, text and charts. This should be considered as the ultimate reference for the MiG-29 family. Great image of a MiG-35 on the front cover.

The book was much too large to get good images on our scanner, so I took pictures of the open book to capture the variety of images and information contained within the covers. Hopefully these images will do justice for this publication.

Here is a breakdown of the contents (since this publication is so large, and includes hundreds of pages with text and images I essentially skimmed the work to complete this review in a timely fashion. Please forgive me if I have overlooked specific details or information. As time permits later every page will be thoroughly read and absorbed. The following is merely a brief overview of the contents.):

What an amazing reference! Plenty of images, both color and black-and-white, many closeups of the various details. There are several images of aircraft under construction with panels open and components not yet installed. The colors in some of the images struck me a slightly 'washed out", however all are worthwhile references for the aviation buff and the scale modeler. Plenty of informtion included regarding development history, weapons, design issues and resolutions, testing and failures (crashes). All around a great read.

I reviewed this publication through the eyes of a modeler and I was impressed. Overall this is a fantastic reference for the modeler. There are many images of weapons and loadouts, details of the aerial refueling probe, the speed brakes, landing gear, radar, the cockpits, canopy details, exhausts and many others. This is a lot of book for the money and offers the scale modeler a bounty of detail and information. Everything is there for the modeler to enhance his MiG-29 model. I know this will be a valuable tool for me. I just hope the wait for a model on the MiG-35 is not too far down the road.

This is very highly recommended.

My deepest thanks to Speciaty Press and to IPMS/USA for the wonderful opportunity to review this publication and to add it to my reference library.