American Aces Against the Kamikaze 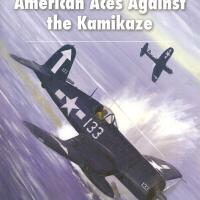 From the Philippines to Okinawa, the unthinkable Kamikaze generated surprise and fear across the US Pacific fleet that outweighed the actual combat effectiveness of these Special Attack units. The new title in the Osprey aces series focuses on the Navy, Marine, and USAAF commands that confronted this new threat. The IJN and IJA lost some 900 aircraft in these mass attacks. 91 pilots from the Navy, Marines and USAAF became aces during these campaigns (most aces were from the Navy).

Edward M Young walks you through the development and first use of the Special Attack units right up to VE day. The Navy’s response and tactics to counter this new threat is very well chronicled. Each ace is covered with his individual tallies and the circumstances of each victory.

Vice-Admiral Takijiro Onishi proposed the idea of using volunteer pilots as a guidance system for heavily laden, mostly obsolete aircraft in an attempt to blunt US forces as they advanced their way to Japan. What surprised me most was that many of the volunteer pilots were experienced flyers who should have been assigned to train new pilots instead, or used for conventional operations. Also, because of Japanese culture, religious beliefs, and the Samurai ethos, there was no shortage of volunteers.

I was pleased to learn about the use of F4U-1C Corsairs armed with four 20 mm cannon instead of the six 50 cals found in the other Corsair types. I have long wanted to model the 1C and now have some history, photos, and profiles to aid me in this reality. VMF-311 was successful in using the 1C against incoming Kamikaze even though they complained about the slower rate of fire.

Approaching undetected, Capt. Judge Wolfe, flying a P-47N with the 333rd FS, came in behind an unsuspecting Zeke and fired off a salvo of four HVARs, destroying the victim in a blinding fireball. This was one of the kills that made Capt. Wolfe an ace during the Okinawa campaign. There are many more interesting tales that you have to read for yourself.

There are 96 pages containing 84 black and white photos, 32 color profiles (descriptions in the back), and a table listing the aces in descending order. I highly recommend this title to add to your growing collection in the aces series – you won’t be disappointed.

I would like to thanks Osprey Publishing and IPMS/USA for the opportunity to review this sample.