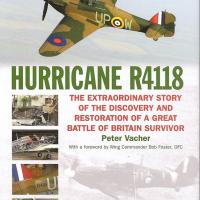 Many of us dream about finding a warbird in a garage and being able to restore it. Well at least I do. Well, that is pretty much what happened to Peter Vacher while traveling in India in the 90s. Not only did he find a warbird, but it was a veteran of the Battle of Britain. A Hurricane Mk.I! This is the story of how he acquired the airplane and ultimately restored it to flying condition.

So now that you’ve found the aircraft, what are you going to do about it? After stewing on it for some years the author decided to purchase it. That is when the real pain began. Bureaucratic red tape consumed six years before the airplane finally left India. The perseverance that the author shows, not to mention the amount of money spent just on airfare, is a tribute to him. Lesser men would have given up when faced with such bureaucracy. The amount of paperwork and all the intrigue that is involved makes for a great story by itself. The book is written by the lucky sod who found the airplane. I say that tongue in cheek as I am so jealous.

The chapter on the Battle of Britain history of the aircraft is quite interesting. The firsthand account adds a unique perspective to the aircraft. I found it interesting that they were able to reunite pilots that actually flew the aircraft in combat. The stories that they share are exciting, as well as, amusing.

Then the real challenges started as the airplane was restored to its original glory.

Once recovered the number of people that involved in the restoration is quite impressive. It is obvious that this operation takes a lot of experts and, of course, money. The amount of work and the lack of any real problems is a testament to all involved.

The chapter on Camouflage and Markings will be particularly interesting to model builders. It offers a glimpse of various component colors which I found to be ideal for a perspective Hurricane modeler. There are some close up shots at the end of the book which will also prove helpful. I would have liked more but the rest of the book really shows the various components.

The author is to be commended for his perseverance and a thoroughly enjoyable book. It is a nice insight into what is involved in getting a former warbird into the air these days. The photos will make this book a nice tool for the modeler. This is the second book I’ve read that describes the restoration of an airplane. The first was “Black 6”. I find that they both offered great insight and a fun read. Highly recommended

Thanks to Casemate for the review copy.