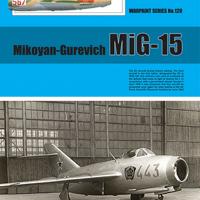 I have long been a fan of the Warpaint Series books from Guideline Publications and have several in my collection. They are excellent references for the aircraft they cover. Typically, they follow a standard format of history and development, service and deployment histories, and finally, technical information and detail photos. This particular volume, however, is slightly different from the others I’ve read since it is translated from Russian sources. Consequently, some of the sentence structure is stilted and you will have to take your time and read these passages carefully to absorb the content.

In the opening pages, the author discusses in detail why the designers chose the swept wing for the Mig-15 - speed. Then the narrative follows themes shown in the “sections” listed below.

Several pages devoted to the 2-seat Mig-15 UTI can be found in the “Fighter Trainer” section. Overall, there was a lot of information new to me. One example, several systems in later Mig-15 production runs were upgraded to mimic those found on the F-86 after the Russians studied one that crash landed, mostly intact, on a beach on the Yellow Sea. In the combat section, it was interesting to read a slightly different perspective of the air war over Korea, particularly the combat between the Mig-15 and the F-86 Sabre. The author names the Russian pilots who became aces and quotes Soviet sources that claimed Mig-15s shot down 650 Sabres while losing 335 of their own. Obviously, these figures conflict with those from USAF sources.

In addition to the numerous photos, most of which are in B&W since they come from period archives, there are seven pages of color profiles depicting the numerous camouflage schemes found on Mig-15s in air forces around the world. If you need some inspiration for an unusual camouflage scheme, look here. Also, 1/72 scale plans for the Mig-15bis and the UTI, as well as a few other experimental versions occupy six pages in the center of the book. The final portion of the book shows two pages of kits, decals, and accessories for the Mig-15 followed by a five page “In Detail” section consisting of detail drawings and photos. These would be useful to anyone wanting to add more detail to their Mig-15 model.

As I have with other Warpaint books, I can highly recommend this “Mig-15” volume to anyone interested in this aircraft as a modeler or its significant place in aviation lore as a historian. You will not be disappointed.

My thanks to go Guidelines Publications for providing for this book and to IPMS/USA for the opportunity to review it.