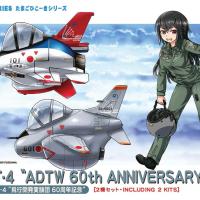 The Hasegawa Eggplane Series is just plain fun. They assemble quickly, are generally well engineered, and for me provide an immediate platform to practice my budding modeling skills. I “assembled” plastic models as a kid; messy tube-glue seams and hand brushed finishes. I reenter the hobby a few years ago by joining the local IPMS chapter and enrolling in the club’s Adult Building Course. Since, then I have built a few successful projects with the skills learned in the ABC and practice on my Eggplanes.

The F-2 & T-4 “ADTW 60th ANNIVERSARY” box set are my 4th and 5th Eggplanes. The box set is a reissue of previous releases of the F-2 and F-4 with special ADTW 60th Anniversary decals. The 2 kits are packaged separately with individual instruction sheets and a combined decal sheet. I proceed as two individual builds.

The Kawasaki T-4 is a subsonic intermediate trainer used by the Japan Air Self-Defense Force and by the Blue Impulse aerobatic team. My goal for this build is to try to use the primer coat as my final finish coat and to repair and accent the panel lines. (Remember that these jewels are a great low emotional investment practice media.) The press-fit engineering is excellent. The fit between the fuselage halves (A1 & A7) and the cockpit module (C5) is amazing; the fit is so good that it leaves one uniform panel line around the entire cockpit deck.

The basic airframe was assembled and ready for finishing in 30 minutes; landing gear, the windscreen and armaments were left unattached for painting. There were minor seam repairs to the fuselage and molding imperfections. I decided to fill in the wing joints as there were a little too large to pass as panel lines. The model was ready to paint with about 2 total hours of work.

I painted the wheel wells, landing gear and inside of the gear doors flat white. The model can be built gear up as an option; I used the option closed doors (C8 & C9) to protect the painted wheel wells. I painted the entire airframe with lite grey primer. I masked and painted the instrument panel area flat black. I applied the instrument panel decal, attached and masked the canopy, and the applied another coat of primer using a hand held piece of cardboard to avoid building up to much paint on the fuselage. Booya, a completely assembled and painted airframe in a day.

I allowed the model to completely dry for a few days and applied a few coats of Future before applying the decals. The anniversary edition of the F-4 has tangerine orange trim on the wing tips, horizontal stabilizer tips and horizontal stabilizer tip. I could not get the decals to wrap around these tips and meet with their corresponding halves. I cut away or removed the tip portions of the decals, masked and painted the tips. In doing so, the masking lifted and destroyed portions of the decals on the wings and horizontal stabilizer. Hum, more practice needed; another Eggplane perhaps? The landing gear, bombs and jet exhausts were detailed and attached.

The Mitsubishi F-2 is a multirole fighter developed for the Japan Air Self-Defense Force. It was developed from the F-16 under a joint contract with Lockheed Martin. I have a Hasegawa 1/48th F-2 with a complex Anime decal scheme in my stash; my goal for this build is to practice applying large decals to curved surfaces.

The airframe is simple enough and was assembled in less than 10 minutes; landing gear and the windscreen were left unattached for painting. The assembly of the engine inlet (A8) and lower fuselage (A9) resulted in a large seam that required considerable work to fill and conform to a smooth transition. Be sure to install the correct vertical stabilizer (D1/D2). The model was ready to paint with about 2 total hours of works.

I masked the cockpit area and painted it with gray primmer. I masked and painted the instrument panel area and canopy flat black. I then painted the airframe and all subcomponents flat white, except for the jet exhaust (A12). I painted the jet exhaust gunmetal. I allowed 2 days for the paint to dry completely before attaching the canopy. I mask the entire canopy to protect it from further painting. I applied two coats of Future in preparation for applying the decals.

I found applying large decals to the compound surface of an egg impossible. There were always large folds where the decal would buckle along the edges. If I slit the folds to allow them to lie flat, I was left a scalloped shape edge instead of a straight edge line. Also after slitting and overlapping the decal to get them to lie flat, the overlap would be a darker shade. My results were totally dissatisfying and a disappointment. Do not despair; Hasegawa has included extra decals that can be applied over the three color paint scheme of red, white and blue.

After applying decals, 20, 29, 30 and 31, I stopped and removed the decals by lifting them with transparent tape and carefully scraping the remains off with a hobby knife. I then masked and painted the nose flat black again, but this time included the area covered by decal 34. I masked the fuselage bottom and painted it red along with the lower surfaces of the wings, lower portions of the horizontal stabilizers and outer surfaces of the sub-fins (A1 & A2). I then masked and painted the upper surfaces that are red including the port side of the vertical stabilizer. When dry I masked and painted the blue sections. I allowed the model to completely dry for a few days and applied a few coats of Future before applying the decals. I sealed everything with another coat of Future.

I now have built five Eggplanes. I have learned or honed a skill on each one of them. They are always a non-stressful fun build.