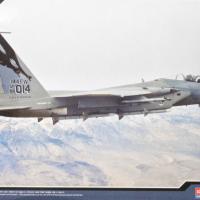 Designed to fulfill the US Air Force’s 1968 requirement for a lightweight air superiority fighter, the F-15 Eagle has arguably been the most successful and dominant air-to-air fighter since its entry into operational service in 1975. Even after over 40 years of exceptional performance and the emergence of the F-22 Raptor, the F-15 is expected to remain in service well into the 21st Century. To keep F-15s current with latest technology to counter anticipated threats, Multi-Stage Improvement Programs (MSIP) have been undertaken between the USAF and the manufacturer to upgrade aircraft during planned depot maintenance intervals. MSIP II is focused on F-15C/D variants, and features upgrades including addition of AIM-120 AMRAAM capabilities, upgrade of its radar system, and select avionics and communications improvements.

As with the actual F-15 airframes, Academy’s 1/72 F-15 kit is based on decades-old tooling, dating back to the 1990’s. Although over 20 years old, the tooling still generates a quality kit, and some new additions to the sprues to incorporate AIM-120C and AIM-9x missiles, new antennae choices, and current markings options keep the basic kit relevant and attractive to build. Options are provided for posing the canopy and speed brake in either open or closed positions and for configuring the air intakes for taxi or full-open configuration. An option for realistic “Turkey Feathers” exhaust nozzles is also provided. Surface detail is recessed and crisp. The kit features Cartograf decals with four marking options.

Settling into the build was like spending time with an old and fond acquaintance, as I had completed Academy’s 1/72 F-15E several years prior. Assembly sequence is logical and flows smoothly, with the only real potential for angst being clunky fit of the air intakes to the fuselage. Careful dry-fitting, scraping, sanding, and shimming is needed to attain proper alignment and smooth surface transitions between the intakes and fuselage. It’s not hatefully difficult, but is time consuming and breaks a fairly rapid build cadence. Afterburner nozzle “turkey feathers” may seem a bit thick for scale, but once built-up and painted provide a pretty convincing effect at first glance. Overall, construction was enjoyable.

At this point, I chose to deviate a bit from the flight plan. The kit comes with markings for current air superiority gray markings common to most F-15C’s – specifically for those of the 144th Fighter Wing of the California Air National Guard. Instead of following the kit colors and markings, I opted to do another color scheme for the 144 FW’s Eagles – a “Fresno Repo Eagles” aggressor scheme featured on Two Bobs aftermarket decal sheet #72-103.

After laying down a primer coat of cheap gray spray paint from Walmart and a vain attempt at preshading with Model Master Acryl Flat Black, I created camo pattern templates from enlarged images of the decal instructions and used them as patterns for marking the demarcation lines. From there, the Tamiya X-14 and Model Master Enamel FS35109 was airbrushed. Once cured, areas adjacent to natural metal areas were masked, and Alclad II Stainless Steel was applied to the fuselage areas adjacent to the afterburner nozzles. Once the Alclad cured, it was masked and the aircraft was airbrushed with clear acrylic gloss and decals were applied. Decals were then sealed with acrylic flat, followed by sparing application of Ammo by Mig Deep Gray panel line wash (A.Mig-1602) for subtle effect.

Although I opted to use aftermarket decals on the airframe, I did use the Cartograf kit decals on the missiles, and they were fabulous! In the past I’ve struggle with some of Academy’s weapons markings. Not this time. The decals were super-thin, but not brittle, and conformed to the fine detail and complex geometry like a champ!

Academy keeps the classic F-15C fresh with MSIP II features and current markings. Aside from a couple of fit and alignment challenges, it was a fun build which yielded a very convincing replica of a great American air superiority fighter. I highly recommend this kit to 1/72 modern jet fans – especially those looking for a current day F-15C.

Thanks to Model Rectifier Corporation for the sample kit and to IPMS/USA for the opportunity to present this review.