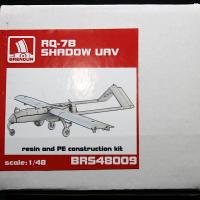 The RQ-7B Shadow is a small unmanned aerial vehicle (UAV) that is currently in service with the US Army and a few other countries. The primary role is reconnaissance, surveillance, and target acquisition. The Shadow may be small in size but its capability rivals the larger platforms. Being small, it can be launched from a trailer mounted catapult and recovered using an arresting gear similar to Navy carrier aircraft. The wingspan is only 14 feet (3.87 m), 11 feet (3.4 M) long and empty weight under 200 Lbs. (77 Kg) and gross weight 375 Lbs. (170 Kg). It is powered by a 38 hp (28.5 Kw) rotary engine (gasoline).

Brungen produces a wide range of unique resin and photo-etch accessories and a few kits in 1/32, 1/48, 1/72 as well as 1/144. This kit comes in a small sturdy box with mostly finely cast resin components, one fret of photo-etch (PE) and a decal sheet covering four different aircraft options. There are a few items with an option of PE or resin. The optional landing gear choices are a resin part that includes struts with wheels, or photo etch landing gear legs with a different set of wheels to be added later. The other optional item is a resin prop or PE propeller. The instruction sheet is very clear indicating the parts in the kit, assembly steps and paint guide.

Standard procedure with resin parts is to wash each part. I removed most of the parts from the pour blocks then cleaned the pieces thoroughly. Care must be taken when separating the parts especially with the tail booms, landing gear and propeller. I did break the first main landing gear leg with wheel while separating the part from the pour block. After that I decided to use the resin parts for the landing gear and I am glad I did that. In my opinion, it looks more realistic than the resin parts. One item I did not do and wish I did was to lightly sand the fuselage & wings prior to assembly and painting. The wings looked good but after painting I could see some texture on the fuselage and I wish it was a little smoother. It is very hard to see so it is not a real issue, just an observation.

Following the instruction steps the wings were added, then the delicate tail boom and tail were added. Using a small drill bit it may be necessary to open the mating surface on the back of the wing for the tail boom, same on the tail portion. The connection points are very delicate so use extreme caution when handling the model. I skipped adding the engine assembly which consists of an engine core section and ducting until the model was fully painted. Next was to add the landing gear (I used PE parts, no wheels yet), PE heat sinks below the wings, and numerous control input rods. The control input parts are very small and I lost two below the wing so be very careful. I left the sensor head off just like the engine so I could fully paint the model before adding these. It also gave me an opportunity to drill a small hole and use a tooth pick to mount the model during painting. Once assembled, it was time for paint.

Overall the model is light ghost gray (FS 36375) with a few patches of darker neutral gray (FS 36270). The engine parts are black cowling and ducting with engine structure aluminum. The instructions do not specify engine colors but with a little research online, there are good photos on how to paint the engine area. Final touches were to add color with the standard red and green navigation lights, red arresting hook, and two red bands for the propeller area. I wish the decal sheet had the red bands. I painted the bands by hand, but wish I used spare red decals in my left over decal collection to make the red bands. Since I painted the red bands before applying decals, I did not measure the “danger propeller” decal and had to cut that decal in half ,then locate one half inside the red bands and the other half forward of the red band. Poor planning on my part in some areas but overall not a major problem with the red bands.

After painting, panel line wash was applied then sealed using gloss clear “Future” to get a good base for decals. The decals were applied with little issue, however the “danger propeller” had a difficult time wrapping around the tail booms. With a sufficient amount of decal solvent, the small decal did conform to the tail boom. Once the decals were on and dried, a final coat of flat clear varnish was applied.

With the model fully painted and decals applied, it was time to add the pieces left off earlier. The engine was installed along with the resin propeller, sensor turret, landing gear, then arresting hook. Note that the model rests normally without any need for a nose weight.

I would like to thanks to Brengun for this very kit that covers a small but highly capable UAV currently used around the world.