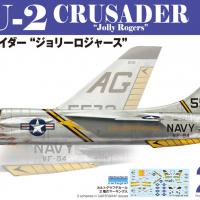 The F8U Crusader (later re-designated as F-8) was the first operational supersonic carrier aircraft serving for the United States Navy and Marine Corps in the late 1950s. Often considered the last gunfighter, it was well loved by pilots for exceptional performance. One interesting feature was the movable wing assembly. While it’s often believed that the purpose of the raised wing was to improve lift, the fact is that raising the wing allowed the fuselage of the aircraft to assume a lower angle of attack on landing, permitting greater visibility for the pilot, while maintaining optimal aerodynamic performance of the wing, slats and flaps.

On to the kit – or kits, as there are two diminutive jewels in the box. In keeping with Platz’ usual high standards, parts are crisp, with minimal parting lines and no flash, and great detail. Assembly was straightforward and quick, I spent far more time masking and painting than building. There’s not much cockpit detail but not much to be seen with the canopy closed, so I didn’t go overboard there. I left the one-piece wings off each model until after painting, which eased handling, masking and decaling significantly.

All painting was done with Vallejo Air colors over a base of Tamiya White primer, with the exception of the aft fuselage, painted with Model Master Titanium. I used a red Sharpie marker to outline landing gear door edges. I applied a coat of Pledge Multi Surface Polish (the artist formerly known as Future <g>) and added the Cartograph decals, which went down beautifully. Included on the sheet are windshield framing decals which made the masking and painting of the clear canopies a much easier task.

After I installed the dorsal fins and applied the colorful squadron markings to the 206 bird, I noticed that there was a lot less ground clearance than I would expect. If I build the kit again, I might trim the fins down and certainly would trim the decals. This may be a builder error, not a kit error.

I ran into two problem areas. One was in adding the Sidewinder missile rails and missiles to the 206 bird. There appear to be some extra rail parts that I don’t believe are used. I referred to online photos in mounting my missiles (which I detailed with extra stripes, roller wheels, etc.) and took my best shot at installing them correctly. The second, and you’ll see it in some of the photos, was what I believe ended up to be some contamination in my trusty Badger airbrush when I applied the final coat of Pledge. If I were going to enter these kits in a contest, I would lightly sand and reapply the clear overcoat. All that being said, I was very happy with the way these two diminutive gunslingers turned out. My thanks to Platz and to IPMS/USA for the opportunity to build them!

Close up
Previous Next