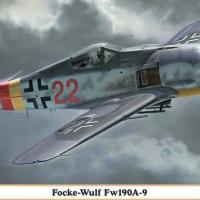 Hasegawa continues to offer easy-to-build Focke Wulf 190s; the latest one is the last short-nosed 190 to be produced during the war, the Fw-190A-9. The BMW-801TS-powered A-9 variant is identified with a larger propeller, an extra cooling fin on the fan, and a bulged canopy. This limited edition release is the basic A-8 kit from Hasegawa with some white metal parts – the cooling fan and a wider chord wooden propeller which are all that are needed to convert the A-8 into an A-9.

The kit is molded in typical Hasegawa quality light grey plastic that is flash free with subtle panel lines. There are four sprues of grey plastic, a sprue of clear plastic, one set of poly caps, and the two white metal parts. I did notice that the wings had three strange holes on the upper surface. These are easily filled. It looks like they are for the stag antler-type antennas, so I’m sure we’ll see more variants.

There are decals for two airplanes, one from 6/JG301 and the other from Stab/JG4. They are typical Hasegawa quality. They look thick on the sheet but once used, they work perfectly. Of course, I can’t be happy with what is in the box, so I broke out some Eagle Cals. I decided on this subject just because I liked the light blue markings and spinner.

The instructions are typical Hasegawa pictorial type instructions that are very easy to understand and follow. There are some holes that have to be drilled out before assembly, so you have to pay attention. It’s best to study which ones and open them now while you are thinking about it.

Construction starts in the cockpit, as usual. This is an easy assembly with just eight pieces, and since it is all painted RLM 66, it is quick. The only things missing are seatbelts. They aren’t even on the decal sheet. A wash of black artist oils and some RLM 02 and silver paint added the customary wear. There are some colors to pick out on the panels, which I did with Apple Barrel paints. A drop of Krystal Klear was added to the instruments to replicate glass. And with that, it was time to close up the fuselage. The fit was perfect. I left the seat out until later.

The wheel wells were next, and this unique assembly was easy enough to build up and add to the lower wings. The upper wings fit just as well as the fuselage. Don’t forget to open up the outer gun panels. These parts did not fit as well as was hoped and had to be massaged into position. I deviated from the instructions and added the lower maintenance access hatches on the underside and the bulges on the top of the wing.

The wings were mated to the fuselage and for the first time something was amiss. There was a .030 gap at the aft joint of the wings with fuselage. Not a big deal, it just needed a strip of plastic to fill the gap. After that was taken care of, I added the appropriate drop tank mount. The tail surfaces fit perfectly, as expected.

The forward cowling was assembled slowly and deliberately. Start with the cowl ring, then add the bottom. Next, I added the top piece to the cowl ring. Then it was time to add the two side pieces. Doing it this way ensured that the cowl would be aligned.

The engine is easy enough to build up. Just make sure that you use the white metal forced cooling fan. Add the exhausts now when you can reach them.

I was at this spot in about five hours, and it was time to wash the model in preparation for painting. I use Alclad grey primer, which is my primer of choice. There were a few areas that needed to be cleaned up and reprimed. Then the model was pre-shaded with NATO Black. Tamiya Light Blue, which was a close match to the decals, was painted on the spinner and cowl ring. When dried, these areas were masked over. Tamiya Flat Yellow was added to the underside of the cowling. After masking, it was time to start the camouflage. Model Master Acrylic RLM 76 was applied to the belly and fuselage sides.

Gunze RLM 75 Grey-Violet and RLM 83 Dark Green were added next. Eagle Cals calls for RLM 74/75, but the colors didn’t look correct to me, especially for that time of the war. Besides, I like the look of 75/83, it is my model, so prove me wrong.

The white metal prop blades were cleaned up with sandpaper and then polished with finishing steel wool. They were primed and painted Gunze Black Green and the hub portion was masked and sprayed Model Master Magnesium.

Now that I had some paint on it, I took the time to add the landing gear. I must say that getting the landing gear to line up on this kit is the easiest I’ve ever found on any 190 kit. After tha,t I added the forward cowling and the fit was perfect with the white metal forced air cooling fan.

A coat of Alclad Agua Gloss was added to the model to prep it for decaling. I used both the Hasegawa and Eagle Cals decals when I thought it appropriate. Can you tell which ones are Hasegawa and which are Eagle Cal? I mean, other than the unit and aircraft personal markings? No? I didn’t think so. People are always criticizing Hasegawa decals for being too thick, but I’ve found them to work great and be as thin or nearly as thin as the top of the line stuff. This set of decals was no different. Try them for yourself, you will like them. All the decals were added with MicroSol and then covered with Solvaset. Both types of decals lay down perfectly.

I didn’t even seal the decals with gloss coat but added a coat of Alclad Flat Kote. Once this dried for a day, I added a slight wash with Burnt Umber artist oils thinned with Turpenoid. This was followed up with some silver chipping done with a silver pencil, and a sponge technique of Magnesium and Aluminum. Some Mig and AK Interactive pastels were added to bring some fading and dirt to the model.

I added some seatbelts made from masking tape, then pressed the seat into the cockpit. Adding the small parts – EZ Line antennas, drop tank, wing guns, prop, and canopy – and the model was done.

This is my first Hasegawa Fw-190, but it certainly won’t be the last. It is a simple and easy build. There are no tricky engine assemblies or gun covers. The few glitches that I noticed were the .030 gap at the rear of the wing/fuselage joint, no seatbelts, the fit of the leading edge outer wing gun panels, and having to fill the three holes on each wing. None of these items is difficult to fix or overcome. On the plus side, the kit was amazingly easy to put together and looks every bit of a Fw-190. The landing gear assembly, including the tire, was fast, easy, and accurate to build. The bulged canopy looks…well, bulged, and fits perfectly. Some may disagree, but the kit decals are beautiful and worked as well as any aftermarket ones. Speaking of aftermarket decals, the Eagle Cals worked perfectly as well.

The whole model took about 15 hours to finish completely. That is great in my book. A great-looking kit that is easy and fun to build. What more could you ask for in a model kit? Is it worth the money? I think so. I may have to break out the early Hasegawa 190s and have a go at them. That is the best compliment that I can give any kit.

Thanks to Hobbico and IPMS/USA for the review copy.