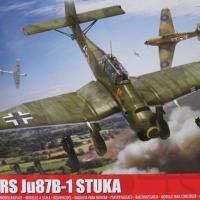 The word Stuka raised much terror at the beginning of WWII, not the least because they had a siren in the landing gear that added a scream to their very accurate dive bombing. However, when they faced determined air defense during the Battle of Britain their days were numbered. They did manage to serve on other fronts throughout the war but were never quite the terror weapon again.

As with a lot of early German warplanes, the Stuka was tested with the Condor Legion during the Spanish Civil War. While the early A models were mostly associated with this conflict there were several of the B-1 models as depicted in Airfix’s new kit that also saw action.

I think this is the third time Airfix has released a Stuka in 1/72nd scale as I seem to remember building the other older kits. This new kit lives up to the new standards Airfix is becoming known for. Lightly engraved panel lines, a good cockpit and decent looking crew all make this a worthy addition to your stash. I did have one part which was short shot, the clear gunsight, but a quick email off to Airfix and not only did I get a new part, they gave me a whole new clear sprue which was very nice to know as I hand painted the frames. Great customer service.

The instructions are nicely laid out and pretty much let you have a trouble free build (for those of you who actually look at them, you know who you are). There are 110 parts with no flash or sink marks on my example. Several options are given including a pilot seat with or without molded seat belts for those of you who want to add the crew or aftermarket belts. The nose is designed so that later versions can be easily kitted and the exhausts are hollowed out. A real nice touch. The wheels can be mounted with a bulge or without based on how you mount them in the gear. You also get optional parts for the siren bumps on the gear. The siren props are also included but not called out in the instructions as they were not carried on either option in the kit. You also get optional main bombs and there are underwing fuel tanks also included but again, not used on the kit options. The canopy can be shown open or closed with an additional part that displays the pilot glass slide over the middle section. This does make it a bit harder to paint the frames on the covered part but I did it from the inside and looks good.

Two decal options are included. The first is a plane from 9./Sturzkampfgeschwader 51, based in Norrent-Fontes, France in August of 1940 as used during the Battle of Britain. The only thing missing on this one is the swastikas.

The second option is a member of Kampfgruppe 88, part of the Legion Condor in Spain, 1938. More about the decals on this one later.

The build was pretty simple with good interior detail including separate sidewalls and a decal for the instrument panel and a bit of wing spar to help align the wings. One oddity was it shows to paint the underfuselage window Aircraft Blue? Seems to defeat the purpose of having a clear part for it so I painted the inside of the channel, part E09 blue and left the window clear.

The stabilizers look to have a slight droop on them so something to watch out for. The separate nose section includes several parts which all fit together well and attach to the fuselage with no putty required. In fact, I didn’t use any putty on the entire build.

I left the crew out and went with the open canopy. As mentioned I hand painted the framing and used a cocktail stick to chisel off the excess. Beats paying for a window mask set or trying to mask all those panels myself.

Since I figured most people who build this kit will go for the BoB version I decided to be different and make the SCW one. Of course, now I have seen two other reviews that also went the same route, great minds and all that. You do need to be careful with the decal placement as the instructions have some listings for decals from the BoB version carried through on the sheet but not actually on the paint scheme. Mainly the under wing crosses number 24. These of course are not used on this version. The tail crosses also appear to be reversed. I put 27 on the port side and 28 on the starboard and they fit the rudder much better. The last thing is the pig squadron markings on the wheel pants both face the same way. I am pretty sure the one on the starboard side is also supposed to face forward.

I painted the kit mainly with Tamiya colors matching up to the Humbrol numbers listed in the instructions. All was going fine until I applied the Testors Dullcote. Once again I got a white coating over parts of the plane even though I had glossed the entire airframe after applying the decals. This would have been great if I was doing a winter scheme but wasn’t helpful for Spain. I wasn’t in the mood to try remasking the camouflage so I ended up hand painting over the Black Green. This is pretty obvious in some places but I was at that just get it done point.

So there you go, a great looking early Stuka for a decent price with little need for aftermarket parts. I see the next version of this kit to be released will be the R-2 version in a Dogfight Double with a Gladiator. Hmm, there goes some more money.