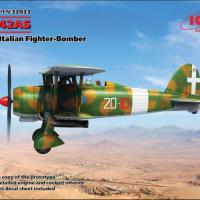 I’ll admit it – I’m totally hooked on ICM’s line of 32nd scale aircraft. In just the last couple of years they’ve managed to produce exceptional models of some of my dream kits – aircraft I’ve always loved and wished they were made in my favorite scale.

ICM has released yet another version of one of these dream models – the ground attack version of the incredibly elegant CR. 42 Falco. This kit comes with a few options, including regular and desert air filters, open and shut engine flaps, bomb racks and three decal selections.

Assembly begins with the interior, which does a faithful job of replicating the delicate framework of the original. The control panels all feature decal dials (which simplifies the painting immensely) and the only thing missing is the seat harness, which can either be made by hand or using some aftermarket set. You can also fill that space with ICM’s new set of seated pilots, which includes an Italian pilot designed for this specific kit.

The other major subassembly is the engine, which can be displayed with some or all of the cowl panels open. My previous build of this aircraft displayed open panels, so I elected to build this with both closed panels and flaps to show off the clean lines of the cowl. This means that I didn’t have to install any of the cylinder caps, but I still installed the wiring, as it would be visible through the front.

The fuselage and other subassemblies go together cleanly, with just a hint of filling around the lower wing installations and the tail. If you want to simplify the painting process, you can do what I did which was assemble the upper wing separately along with all the struts, fitting them in sets and letting them dry thoroughly before installing the next set, etc. This permits the struts to be painted the underside color without masking. I did the landing gear spats in a similar manner, adding the side strut to each and carefully placing them to dry in the proper attitude before setting them aside to paint separately.

There is a little rigging required by the kit – the actuators for the flaps and rudder were made from trimmed pieces of acupuncture needle, as it was fine enough to do the job well. The two rigged lines on each wing were made with handmade loops and silver thread – not a particularly difficult procedure if you’re at all comfortable with WW1 aircraft modeling.

Although the kit provides some very interesting schemes, I opted for a somewhat more standard scheme which I’ve always been fond of, using the kit decals for all but the squadron markings. The kit decals, by the way, are really top notch and conform easily to the model surface with little to no coaxing.

So there you have it – a prime example of one of the most elegant aircraft to come out of World War 2. To reiterate, the build was simple and straight-forward with no traps or complications, even for a biplane. The end result is a magnificent addition to any collection. Kudos to ICM for continuing with this first-rate series of kits and to the excellent engineering and ease of build.

My thanks to ICM for another masterpiece, and to IPMS/USA for a chance to take another crack as this outstanding series. Be safe, everyone, and happy modeling!