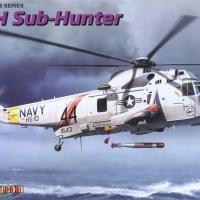 The Sikorsky Sea King became operational with the United States Navy in June 1961. When introduced, the Sea King was a considerable advancement over previous helicopters. It was used primarily for anti-submarine warfare: detecting and tracking Soviet submarines. During the Cold War, the Soviet Navy built a submarine fleet that at one point included more than 200 operational submarines. Luckily for the Soviets the highly capable Sea King never had to kill one of their subs.

It was the world's first all-weather amphibious helicopter and one of the first anti-submarine warfare (ASW) rotor craft to use twin turbo shaft engines. The SH-3H was an upgrade of the SH-3G. It included SH-3G features with improvements for ASW, anti-ship missile detection and other airframe improvements. 163 SH-3Gs were upgraded to SH-3H configuration. These Sea Kings typically had a four-man crew; a pilot and copilot in the cockpit and two aircrew in the cabin operating and monitoring the aircraft's detection equipment.

My sample arrived in a somewhat sturdy Cyber-hobby box featuring a nice painting on the boxtop. The part sprues were well protected in typical poly bags. Upon closer inspection I found them to be flash free, without sink wells and showing only a few minor pin ejector marks. The delicate plastic has excellent detail and comes molded in light grey and crystal clear. Also included in the box are: one small photo-etch fret, one colorful Cartograf decal sheet for several USN squadrons and the instructions. The cabin doors can be displayed open, showing the helicopter’s interior, which includes the radio/display equipment, two seats for the systems operators, plus the active dipping sonar device (AN/AQS-13 or AN/AQS-18). This kit also features foldable rotor blades and brand new parts such as the bottom of the fuselage, buoyancy sponsons, landing gear and the underbelly MK46 torpedo.

After I familiarized myself the contents and instructions I began by drilling out several holes in the one piece cockpit/cabin floor to attach the ASW parts. I then prepped and built all the smaller sub assemblies and added them to the floor. This included: the pilot seats, the crewmen seats, the instrument panel, the flight controls, the radio equipment rack, the sonar equipment station, the sonar winch and the interior bulkheads. All this stuff looks and fits great but I soon discovered that the instructions are riddled with mis-identified part numbers. Next step after painting the interior was to close up the fuselage halves. In order to do so you will need to cut a large opening in the bottom fuselage part to accept the ASW parts (you want a tight fit here). While test fitting I noticed that the interior ceiling is missing and not supplied with the kit. Here I deviated from the out of box build and scratch built one, but sadly lost these in progress photos due to a computer crash. Once the fuselage was closed up I then added all the little knock off parts to the bottom side. The cockpit glazing and cabin windows were next, followed by more knock off items added to the rest of the fuselage. As soon as the tail boom, engine cowling, cargo door, boarding ladder/door, landing gear sponsons and hoist winch sub assemblies were completed I added them and built up the rotors. The elaborate main rotor can be built either folded or set for flight. I chose to fold mine. The tail rotor consisted of two pieces. I suggest that if you fold them check online photos to determine the blade positions as the instructions are vague on how they hang when stowed. Everything else went together very well. I then prepped for painting and decaling. The decals are awesome and went down relatively well.

This kit is well designed and cleverly engineered. The fuselage is correctly proportioned with detail both inside and outside other than the interior ceiling. All said and done I rate this one a solid 9 out of 10 on the Greg-o-meter. The plastic and decals are near perfect. I’m only knocking off a click for the instructions. I highly recommend this kit and would like to Thank IPMS and Cyber-hobby/Dragon for the opportunity to present such a great kit.