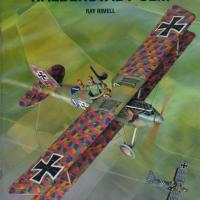 Ray Rimell’s (Raymond Laurence Rimell) latest in the “Building the Wingnut Wings” series was originally intended to be a paired build with the Wingnut Wings Halberstadt Cl. II for a combined Albatros Special. The sheer volume of material saw that these two aircraft would be quickly separated (Building the Wingnut Wings Hannover Cl. II was the previous release in this series). The Halberstadt Cl.II was designed as a two-seat escort fighter to meet a 1917 requirement to protect reconnaissance aircraft. As the war progressed, the Cl.II saw an increasing role in ground attack. The first release by Wingnut Wings was in November 30, 2018, with a Cl.II Early version (kit 32049). Wingnut Wings released the Late service version (32062) on the same day. The bonus was a release of a “Duelist” edition featuring Halberstadt Cl.II Late and a RE.8 ‘Harry Tate’ to complete a triple play.

The front cover is Ray Rimell’s completed 1/32 Wingnut Wings Halberstadt Cl.II along with figures by Doug Craner. Jerry Boucher created the digital composite background and effects to go with the Ray Rimell’s color photograph. I counted 15 clear black and white photographs (mostly previously unpublished) and 182 color pictures on glossy pages. Ronny Bar contributes seven all new color profiles (plus a color 3-View). There is also a line drawing to show the proper placement and action of the aileron / elevator control unit.

Similar to the eight preceding volumes in this series, you will be treated to a very detailed, step-by-step build of the Wingnut Wings 1/32 Halberstadt Cl.II. Be aware that this is no “Plain-Jane” out-of-the-box build. Ray Rimell brings his lifetime of modeling expertise to bear for this super-detailed build where each component becomes a model unto itself. A feature that Ray Rimell favors is noting the detailed color photographs of the build with reference codes that are addressed in the text. A significant amount of text is focused on painting and decaling since the Halberstadt had some rather unique color applications. Ray Rimell also includes five pages of a Norwegian license built FF.7 Hauk (Hannover Cl.V) with period photographs and color pictures of the forward fuseleage on display at the Norsk Teknisk Museum in Oslo. These were received after the publication of the previous Building the Wingnut Wings Hannover special and will probably spark some interest on those building the Hannover Cl.II. The Chapters include:

Ray Rimell has a very readable style (no doubt polished over his long career) that is supplemented with clear photographs, color illustrations from Ronny Barr, and line drawings from Mick Davis. Although this book is targeted at the 1/32 Wingnut Wings kit, there is extraordinary value in this reference for kits from Decapod Model’s 1/350 Cl.II to Guillow’s 1963 1/24 CL.II in balsa and tissue. There are plenty of kit in 1/48 (Aurora, Blue Max, Mirage Hobby, and Tom’s Modelworks) and 1/72 (Ardpol, Formaplane, Ludermann-Modellbau, Pegasus, and Skybirds) and many aftermarket decal and detail options. I would consider this edition essential as an aide to your build in your favorite scale. I was able to read this tome easily over a few nights. If you own any of the previous releases in the Building the Wingnut Wings series, you know what you are getting. If this is your initial entry into this series, you will be quite pleased. Myself, I can’t wait for the next volume (Hint, it covers a certain triplane to be released by Wingnut Wings)!

My thanks to Ray Rimell, Albatros Productions, Ltd., and IPMS/USA for the chance to review this great book.