Thunder Over the Reich: Flying the Luftwaffe’s He-162 Jet Fighter 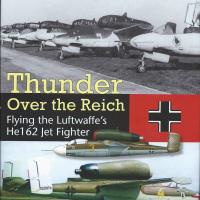 This book is written by one who was there. 1st Lt. Wolfgang Wollenweber flew for the Luftwaffe from 1943 till the surrender. Beginning his service in Me-110s and continuing on to Fw-190s, a brief training stint on Me-163s and finishing up in the He-162!

The book begins with his assignment to 13. Zerostorerstaffel/Jagdgerschwader 5 in Salmijarvi. Where on earth is Salimijarvi you ask? So did Lt. Wollenweber! Having expected an assignment to warm North Africa he soon found himself heading to above the Artic Circle along the Artic Ocean to fight the Russians. A desolate area with stark living conditions and never ending day or night depending on the time of year. An area with little to do outside of combat and most depressing on those who served there.

The first 10 chapters of the book details his experiences in this frozen wasteland! From combat with the Russians to working as a shipboard liaison officer, to friendships made, and problems with squadron mates and superiors, it is all well documented in a very interesting story.

Chapters 11 and 12 detail his volunteering for defensive duties and training to fly the Me-163 rocket plane. However a lack of fuel would prevent him from ever flying a powered komet! Thus he asked for posting to a jet squadron.

Sent to join Jadgeschwader 1 which was to convert to the new He-162., the remainder of the book covers his time with jets. Wollenweber lays to rest the fallacy that the He-162 was capable of being flown by members of the Hitler Youth. Calling the end of such a crazy idea a miracle that saved many a young boy. The book continues with stories of ferrying aircraft from the factory, flying them on combat missions (yes, it did see combat, with a couple pilots claiming victories over Tempests) as well as detailing the weak and strong points of the 162! He was quick to realize that using rudder in a turn would cause the plane to flip over onto its back and crash. Also that the engine and airspeed indicator would exhibit problems when reaching past 500mph. Wollenweber became one of the most experienced He-162 pilots in the Luftwaffe. He gives a good accounting of its combat record and puts to rest claims of He-162s shot down in combat. He also gives a good account of the shortages, horrors of the situation in Germany during the final months of the war. I also enjoyed the story of his rescue of a downed Tempest pilot from hostile townspeople who had suffered from all the air raids.

The book also includes the pilot’s notes/handbook on the 162 including a translation of each page into English. The book concludes with a cutaway drawing, captured aircraft and museum exhibits and lastly with the unbuilt 162 projects.

This is a very good book! I enjoy how the book starts off with assignment to a fighting unit and not with the pilots training experiences. The author’s style is very readable and highly informative. The book gives a good account of his time as a fighter pilot. His time spent flying some of the world’s first jet aircraft provided the reader with a great firsthand account of the joys and tribulations of early jets. The book provides a lot of information for those interested in aviation history, WWII history as well as inspiration for the modeler as well! I recommend it to all! The book can be purchased from the website above or by calling 1-800-895-4585. A $6.95 shipping and handling fee is applied to each order.