Forgotten Aerodromes Of World War I 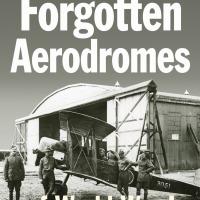 The growing interest in World War I aircraft among model builders and aviation history buffs has fostered an increase in the variety of publications offering information about the subject. Among them is a well-researched hard cover book recently published by Crecy Publishing (and distributed in the US by Specialty Press) about the military airfields that populated the British landscape during and after WWI. The Brits referred to these facilities as Aerodromes, and they were numerous. In FORGOTTEN AERODROMES OF WORLD WAR I, author Martyn Chorlton documents a total of 502 RFC and RNAS sites by country and county. Many began as nothing more than a grassy field with a simple structure or two. Most have been lost to other uses in the nearly 100 years since they were constructed, but some still serve. Remnants of others can be found, but many of their names are etched in history.

This impressive book presents a comprehensive history of Britain’s Great War military aerodromes supported by more than 300 photographs and drawings. Organized by county, using OS map references, each of the decommissioned aviation facilities of World War I is examined with descriptions of their function and details of their various uses, unit assignments and (in some cases) current purpose, including remaining remnants of the period.

In the buildup to WWI, with flying in its infancy, Britain found itself with an immediate need for pilots, aircraft, and airfields in order to make full use of the advantages which flying brought to their forces. By the end of the conflict, more than 500 military sites, ranging from fully operational aerodromes, airship stations, seaplane stations, acceptance parks, kite balloon stations, and aircraft factories had been built, together with non-flying stations such as group and wing HQs. Once hostilities ceased, a great many of these facilities were decommissioned. Some, however, were to remain in service and serve as important bases, key to the Royal Air Force countering the Luftwaffe attacks that would threaten the British Isles a little more than 20 years later.

The book’s Table of Contents includes the following:

Model builders interested in learning more about the story of the WWI British aircraft models they are building will gain a lot from reading this book. It is reasonably priced and highly recommended.

FORGOTTEN AERODROMES OF WORLD WAR I may be ordered directly from Specialty Press by visiting www.specialtypress.com or calling 1-800-895-4585. They advise a $6.95 shipping and handling fee will be added to each order.

My thanks to Specialty Press for providing the review sample and to IPMS/USA for the opportunity to review it.