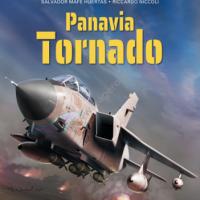 Background and History from Wikipedia

The Tornado was developed and built by Panavia Aircraft GmbH, a tri - national consortium consisting of British Aerospace (previously British Aircraft Corporation), MBB of West Germany, and Aeritalia of Italy. It first flew on 14 August 1974 and was introduced into service in 1979–1980. Due to its multirole design, it was able to replace several different fleets of aircraft in the adopting air forces. The Royal Saudi Air Force (RSAF) became the only export operator of the Tornado in addition to the three original partner nations. A tri - nation training and evaluation unit operating from RAF Cottesmore, the Tri - National Tornado Training Establishment, maintained a level of international co - operation beyond the production stage.

The Tornado was operated by the Royal Air Force (RAF), Italian Air Force, and RSAF during the Gulf War of 1991, in which the Tornado conducted many low - altitude penetrating strike missions. The Tornados of various services were also used in The Bosnian War, Kosovo War, Iraq War, in Libya during the 2011 Libyan civil war, as well as smaller roles in Afghanistan, Yemen, and Syria. Including all variants, 990[1] aircraft were built.

In this section the authors provide the history of the Tornado's development. Several images of prototype aircraft from the three countries involved in the aircraft development and manufacturers. Images from the various component factory assembly lines are included as well as an interesting picture of a Vulcan bomber with the RB 199 engine fitted in a ventral location on the bomber. This section includes a striking image of an RAF IDS with ALARM antiradiation missiles in a climb. Noteworthy is the staining of the underside of the aft fuselage section.

The above is just a brief synopsis of the more detailed text in the book. Worthwhile reading.

My first reaction upon opening this book and scanning the contents was "WOW". The pages are filled with full color images of Tornados with plenty of up close views that provide the modeler with great details and weathering effects that will provide valuable information when building any one of the Tornado kits currently available.

Additionally, the book includes a pullout 11" by 7 3/4" full color picture of the cover art that is really nice and suitable for framing.

My thanks to Casemate Publications and IPMS/USA for the opportunity to review this publication. Highly recommended.

Prototypes in flight and factory