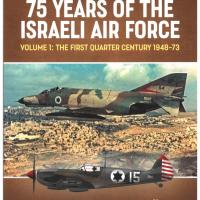 The Israeli Air Force has developed a reputation that is legendary and for good reason. Against overwhelming odds they created an air force that would dominate their adversaries.  In a two volume series, of which this is volume one, it covers the origins of the Israeli Air Force in 1948 to the end of the Yom Kippur War in 1973. Published by the Helion Company, number 28 in a series that covers the armed forces and conflicts of the Middle East, the book follows an established format. The text is chronological and packed with black and white photographs. The center of the book features color profiles of aircraft across the time line covered in the book as well as a small selection of color photographs. The photographs are well clear and well produced, something that I appreciate in publications such as this.

The book summarizes the history of the Israeli Air Force. It is a fascinating story, in particular in the beginning of improvisation and grit in the face of challenges. Faced with hostile neighbors and disinterested British colonial overlords, the Israelis were able to gather a mish-mosh of fighter aircraft from Czechoslovakia, and other sources. What they lacked in professionalism and doctrine, they made up for in courage and drive. The lack of resources continued well into the 1950s. With a mixture of French Jets and let overs from the opening days of the country, they were able to participate in the abortive 1956 Suez campaign, where the French and the British enlisted the help of Israel to keep Egypt from nationalizing the Suez Canal. While the Israelis played a key role, the western allies were castigated for a heavy handed attempt to turn back the clock and assert their role as former colonial powers.

In the aftermath of the Sinai campaign, there was a concerted effort to move beyond the haphazard nature of the air force and it was the run up to the 1967 six day war, that the air force was able to establish a relationship with France. This move would provide the backbone of the assault force that conducted one of the most successful preemptive strikes of all time on the eve of the six day war. The outright spectacular success these raids had on the air force was profound. Given the success of the surprise attack on the various airbases of their adversaries, it had a profound effect on how they wanted to achieve air superiority. While successful in 1967, it would be a challenge in 1973. With the Yom Kippur War, given how effective the surface to air missile curtain moved across the Suez Canal, it caused the Israelis had difficulty in containing the Arab threat.

When I was a kid, my favorite hobby shop carried a series of books and magazines that profiled various aspects of the Israeli Defense Forces. They were celebratory in tone. This volume in the Helion series is concise, objective, and a critical history of the IAF. If you are not familiar with the history of the IAF, this is a great way to familiarize yourself with a compelling and interesting story. Having read a fair amount about the IAF, I have not seen many of the photographs, so between those and the color profiles, it is a boon to any modeler. I heartily endorse this work. My thanks to IPMS and Helion & Company for giving me the opportunity to review this book.