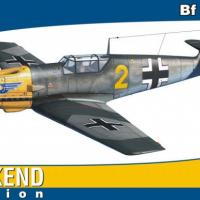 This aircraft need little introduction, being one of the two major fighters of the German air force in World War 2. The Bf-109E-1 was the first of the Emil versions and lead to the F through K versions. The Emil was also the basis for the ill-fated carrier fighter for the Graf Zeppelin.

This was one of my top 5 favorite build of all time. Interestingly, 4 of my five are Edward kits. The kit had only a few problems and issues. Construction started in the cockpit – easy going and clear directions. My first issue was here. Eduard is a great company, with some great kits; with that said, the seat leaves much to be desired. Or it leaves it very open to aftermarket items. I will replace the seat with a resin one as soon as this review is completed. The build moves to the fuselage and this was my first problem – mine, really, as I did not properly align the rear armor plate with the edge of the fuselage, and so I created a problem with canopy fit. But I own this one as I think I stuck my finger inside the fuselage and moved it out of place. The second issue I ran into was the directions were written by the same guy (I THINK) who wrote the instructions for the last Dragon tank I built. No wording, lots of pictures, and no warning of changing the open engine to a closed engine compartment until the LAST page. By then you may have glued a lot of parts that will need to be removed, and it may take some major surgery to fix this. A small warning would have been nice here. Lesson learned: read ALL of the directions (okay, look at the pictures) first before moving on to the kit.

And that, ladies and gentlemen, was the end of all of the issues and problems. I used NO putty on this plane at any point. Wing lined up. Tail lined up. Prop fit just fine, but looks scary until you finish it. Decals were a dream. And I loved the one and only paint scheme.

I would recommend this kit to everybody. It was a dream to build and I caused my own problems with it, and cannot blame any of the problems on the manufacture. I loved the blue eagle of JG 52. I just can’t say enough good about this kit. If you want a 109 and you’re aged 14 to 95, then I recommend this one to you!!

I would like to thank Eduard and IPMS-USA for the chance to build and review this wonderful kit.