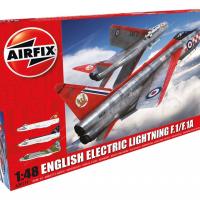 The English Electric Lightning was designed and developed during the 1950s at the height of the Cold War era. The Lightning was the only all-British Mach 2 supersonic fighter aircraft, and it was the RAF's primary interceptor for more than two decades. The F1 version of the Lightning entered service in 1959, with the improved F1A in 1961.

The Lightning’s uniquely stacked powerful engines provided the Lightning an incredible rate of climb, superb service ceiling, and top speed placing it well ahead of rival contemporaries. It was used by the Royal Air Force and the Royal Saudi Air Force, then finally retired in the late 1980s.

First released in 1997, this kit has been reboxed several times by Airfix. This kit has also been boxed by the Grand Phoenix and Eduard model companies. I built this kit several years ago and I remembered thinking then just as now when I saw the box, wow that’s a large box for a 1/48 scale kit. The new box-art is visually appealing as well, featuring two red tail Lightnings framed in the trademark red Airfix box. Upon inspection of the contents, my impressions were the same now as then; excellent overall detail and quality. The pieces still have beautifully engraved panel lines.

Starting with the cockpit, I first constructed the four piece ejection seat and painted it. The cockpit tub consists of the control stick and throttle plus the instrument panel and ejection seat. Decals are used for the console panels and the instrument panel. The pilot is made up of 3 pieces; 2 arms and the body. The shock cone/nose gear bay was next, and used only 3 parts and fit snugly into the bifurcated intake trunk. The trunk is finished off with an engine faced bulkhead. The bulkhead only provides the lower engine face. Next I built up the exhaust jet pipes system. The intake and the cockpit must be fitted before the fuselage halves are joined. Ready to close up the fuselage halves, I added 20-22 grams of ballast behind the engine bulkhead to prevent it from being a tail-sitter. The wings were next, and they were very simple and fit great. The two-part flaps are separate, and can be positioned. The horizontal and vertical control surfaces were added next, along with the speed brakes and lots of smaller bits. The speed brakes can be positioned open or closed. The landing gear and wheels were built up next, and my only complaint would be about the sink marks on the gear doors. Luckily this can be easily corrected with just a little spot putty.

The Firestreak and the Red Top missiles are made up from seven parts. Both missiles have a clear plastic part for the radome. I decided not to add them, and I also used alternate decals that I preferred.

Awesome kit, I rate it a solid 8 outta 10 on the Greg-O-Meter. I would like to thank Hornby, Airfix and IPMS for the opportunity to present the fine model kit.

20-22 grams of ballast behind the engine bulkhead

Sink marks on the gear doors, corrected with a little spot putty