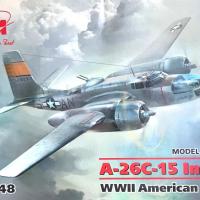 The box is a very sturdy cardboard box. The box “lid” flips up when a tab is freed from a holding slot. The parts within are safe and secure in a large baggie. The clear parts are contained in a separate baggie which prevents any contact with other parts runners, keeping the “glass” in pristine condition, and there is a lot of glass because the A-26C-15 is the “glass-nose” variant. The box art is an exceptional example of aviation art and particularly useful during the construction phases of the project as well.

The decals are of high quality. Color registration is excellent, the printing is so clearly done that one can read the text on the decals that display verbiage. The decals are “thin” and sturdy. I know they are sturdy because I managed to mangle and tangle one of the stencil decals that are placed on the prop blades. I had to “unroll” it after I failed to apply it properly to the prop blade. In the end, after much poking and prodding, I got the decal to lay out nicely and it went on the prop quite easily after I had developed a lighter touch with the tweezers. My fault and not the fault of the decal. A significant feature of the decals is that the backing film does not extend beyond the outside borders of the marking. For example, the “star and bar” insignia for the wings and fuselage did not require any trimming. In fact, I did not trim the exterior lines on any of the decals. I was somewhat apprehensive about the four “wing walk” decals (basically each is a rectangle of clear carrier film outlined with a black rectangle of four lines that form the rectangle. I was considering the wisdom of removing the clear carrier film inside the area surrounded by the black lines but having seen how well the “star and bar” decals behaved during application, I chose to apply the “wing-walk” decals as they are presented on the decal sheet. In the end, the clear film simply disappeared upon gently squeezing them unto the wing surface with an absorbent cloth. The decal sheet does not identify the company that printed the decal sheet, but their work is quite impressive.

A downloadable PDF of the kit instruction booklet is available for those who wish to preview the project.  The 24-page booklet includes the usual items such as a brief history of the aircraft, technical specifications of the aircraft, and a paint chart that includes color ID numbers for Revell and Tamiya paints. Page 1 also includes the 9 icons that you will see throughout the booklet and their meanings. For example, a question mark within a square translates to “optional”, and the image of the business end of a drill bit indicates that a hole must be opened. All 9 icons are easy to interpret. Pages 2, 3, and 4 are illustrations of the parts runners, with each part on the runner identified by its part number. Also, those parts which are not to be used on the A-26C-15 are highlighted in a pink color.

The construction sequence that is presented in the instruction booklet is important. There are some bits of advice that I can share regarding that sequencing. First- make a list of parts that should/could be painted prior to their removal from the parts runners. You will find that construction progresses more rapidly, and more enjoyably, if you have painted the interior parts, engine parts, and landing gear parts prior to assembly. In many cases you will find that when the parts are removed from the runners and assembled, that the gates (the connection point between the part and the runner) are easily removed, and in many cases, will not be visible when joining parts during assembly. Secondly- decide if you wish to display the finished project in gear up/down, bomb-bay open/closed, canopy w/ hatch opened/closed. Two canopies are provided in this kit. One is in the standard configuration with no hatch opened, making the canopy a single part. The second canopy has the “hatch” piece as a separate part so the hatch can be glued in the open position. Either way, the cockpit is easily visible. As for the bomb-bay, I modeled my project with the bomb-bay doors opened and the landing gear extended. There is no way to view the bomb-bay unless one picks up the model, and woe be onto the judge/guest that attempts such a foolish action! The bomb-bay is very superbly detailed and is impressive, but the opening simply cannot be “inspected” without handling the finished model. Were I to build another of ICM’s A-26/B-26 offerings it would be with the bomb-bay closed.

I cannot be sure about this next point, but in Step 25 on page 9, my notes indicate that the part labeled, H1-6, is, in fact,  H1-5. The illustration of Runner # H1 on page 4 identifies that part as H1-5. Supporting that notion, there is no step on the instructions that refer to part H1-5. Frankly, it is of little importance. The illustrations of part H1-5 and H1-6 within the assembly “steps” are very clear and accurately “picture” the correct parts. Lastly, while no painting masks are provided, ICM does provide, on page 22, masking templates. It does not take much time or effort to use those templates to “manufacture” your own masking materials.

In my view, during the assembly of the kit, the excellent design and engineering of the parts, and the thought and planning that went into the manufacture of this kit will become evident. My experience with ICM kits is sparse, and those that I have built are rather old kits, but I found that the A-26 puts this kit among the “Elite”, when considering which manufacturers produce superior products.  For example, one of the images that accompanies this review shows the unpainted fuselage with the main wings in place. It should be noted that the wings are not glued to the fuselage in the photo but are merely dry fitted. In fact, the fit was so precise that no putty was used to fill the usual seams along the wing roots, because there were no seams to fill! You will notice other areas have some putty applied and that is due mostly to my being a bit heavy-handed during assembly.

On pages 6 and 7 of the instruction booklet, the steps direct the modeler to attach various internal parts to the fuselage halves. In Step 13, four bulkheads (parts B6, B9, B3, and the subassembly glued together in Step 8) are attached to the left fuselage half. This is an example of superior engineering. Not only do these bulkheads provide strength and alignment assistance when the fuselage halves are assembled, but B3 and B5 provide support arms which extend about 2 inches outward, on either side of the fuselage halves, upon which the wings are “slid” into position. There are no concerns about achieving the proper dihedral of the wings, and no worries about having to fill seams along wing roots.

Throughout the assembly phase I found that the locating pins/holes that ICM molded into the kit were such that when dry-fitting the parts, I could “feel” the connection of the parts take place as the pins and holes aligned. This engineering also appeared when attaching the gear doors and bomb-bay doors to the nacelles and fuselage. It was possible to “feel” when the correct position for the part had been achieved. Another example of the quality of the engineering and molding can be seen by dry fitting some “glass” pieces in place. The canopy for the cockpit and the canopy for the turret gunner’s position fit so well that the parts could be dry-fitted, and the model flipped upside down, and the “glass” remained in place.

There are a few recommendations that I present for consideration. It is not necessary to attach the machine gun barrels into position until after the model has been assembled and painted. The barrels can be clipped off the arm to which they are molded, and then inserted into the holes in the turrets after assembly, painting, and decaling. The chance of breaking off a barrel is diminished. Another recommendation involves the cylinder blocks of the engines. The engines look great when assembled but only the front of the forward set of cylinders is visible after assembly. Do not spend time worrying about the small seam that appears along the joint line when assembling the cylinder blocks. It is not visible when the model is finished. Of course, one could open some of the paneling on the cowl to display their handiwork if one wished. It would be advisable to drill some rather tiny holes on the tail to make it easier to attach the antenna rigging when that time comes. Those two holes could be drilled at any point after the fuselage halves have been joined. A point about the landing gear; the landing gear plus tires are not attached to the nacelles until Step 81, and that is after the nacelle halves have been assembled and glued to the wings. In other words, you must carefully insert the assembled gear into the wheel wells, find the four locating holes into which the locating pins should fit and then apply glue. Were I to build a second A-26 I would assemble the landing struts, leaving the tires off, and dry-fit the gear struts into the nacelles prior to gluing the nacelle halves together. I would then test fit that sub assembly onto the wing and if the nacelle and wing fit properly, I would glue the gear struts in place in Step 55 and not wait to Step 81. The danger, of course, is that the gear struts might be damaged in the intervening steps. As I saw it, the most difficult assembly task was to get those assembled gear sub-assemblies to fit into the assembled nacelles in Step 81. But then that was “just me” and your experience may be vastly different. And another comment about the nacelles. The instructions indicate that in order for the finished model to rest on its gear rather than drag it’s tail on the ground, is to add weight into the front portion of the nacelle. The instruction indicate that 100 grams of weight should be added to each nacelle. I used BB’s mixed into a “clod” of Silly Putty. And, indeed, when tested, the model sits on its gear. One last comment about assembly, more of a suggestion, would be to determine which of the three variations provided for with parts and decals, you will decide to model prior to beginning the project. There are subtle differences in what parts are used for each of the variations.

I found this kit to be of superior quality as evidenced by the excellent “fit” of the parts, the order of assembly suggested by ICM, the exquisite detail molded into the surface of the instruction panel, the wings, and the fuselage. I chose not to use after-market seat harnesses. The kit does not provide parts or decals of seat harnesses and, for review purposes, I do not add after-market or scratch-built parts. The instructions are clear and well laid out. The decals are superior. Well Done to ICM! Thanks to ICM for providing this review sample to IPMS/USA

Fuselage with most of interior dry fitted