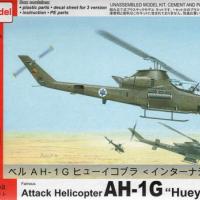 The AH-1G Huey Cobra was delivered to units in 1967, and was first used in combat during the Tet offensive in 1968. The Cobra was used for fire support, escort for transport helicopters, aerial rocket artillery, and in hunter killer teams in conjunction with Hughes OH-6s. Bell built 1,116 AH-1Gs between 1967 and 1973; 300 were lost in combat during the Vietnam conflict. The US Marine Corps used the AH-1G, as well as foreign countries such as Israel and Spain. Israel started to receive their Cobras in 1970, and they were active during the 1973 conflict with Israel’s Arab neighbors. Spain took delivery of their Cobras in 1968, and they were used by both the Spanish Army and Navy.

In AZmodel’s 1/72 scale kit of the AH-1G, you get 61 parts in light brown plastic, one in clear plastic, and 14 parts in photo etch. There is no noticeable flash, noticeable shallow sink marks, and all ejector pin marks are hidden away. The clear canopy is in its own plastic bag, thus preventing any scratches. The decal sheet is in register, but there are few stencils so decaling should take little time. There are three marking options provided. The first is for the 1st Cobra Squadron, Israel Defense Force, 1970; the next is for the 7a Escuadrilla, Spanish Army, 1968; and last is for the Spanish Navy, 1968. I decided to build the review sample in Israeli marking, as I find the Israel Defense Force and its conflicts interesting.

The kit instructions seem to be the same generic instructions that are provided in all of the different boxings of the Cobras released by AZmodels, so it will be very important to check your references carefully because not all the parts provided in the kit will be for this particular version. However, the instructions have very good illustrations, and once you figure out the parts you need for this version, you should have no further issues.

I first dry fitted all the main parts; the only issue I found was that the canopy was wider that the fuselage. I needed to wedge bits of plastic around the cockpit openings to widen the fuselage to meet the width of the canopy. In the end, I didn’t wedge quit enough plastic at the back of the cockpit opening. The canopy still sits a little proud, but by the time I realized this, the Cobra was ready for paint.

The cockpit components were painted and assembled as per the instructions. However, I wasn’t completely confident with the accuracy of the color callouts in the instructions, so I went online and decided to paint the cockpit the way I’d seen it depicted in real Cobras and other modeler’s Cobras. The assembled cockpit fit positively into the fuselage with no issues.

I next blanked off the small auxiliary intakes on the upper side of the engine cowling with plastic scraps to prevent the see-through effect. AZmodel provides photo-etch mesh screens for the main intakes and the small intake in the front, above the rear canopy, which were installed next. Referring to photos and pictures from Brengun’s photo-etch set for this kit, I also added three intake fences per side, using shaped plastic scraps, to busy up this area. As I had decided to build my Cobra as an IDF machine, I needed to assemble the “toilet-bowl” exhaust, designed to redirect the hot engine gas up and away, which is part of the anti SA-7 Strella kit added to Israeli Cobras. Once I had cleaned up this exhaust extension, it was added to one fuselage half and reinforced. With all the internal bits in place, I could then close the fuselage together.

Not much filler putty was needed, and the fuselage seams were quickly sealed and sanded flush. Next, I added the tail fin, tail stabilizers, and weapons support wings. The fit was pretty good with only a little Mr. Surfacer needed to fill micro gaps. The landing skids were then added, but they fit too loose because the holes in the fuselage were too big. I added segments of .010ʺ strips to the skids’ locating pins to make them fit tightly. Once the skids were installed, the Cobra became a tail-sitter. I was able to put enough weight in the hollow gun turret to correct the tail drag. Since I was working on the turret, I then detailed it to match my reference; the kit turret is plain and lacking refinement. The fit of the main canopy isn’t the best, as mentioned earlier, but I also noticed that it didn’t fit the sill either, being too wide. I shimmed up the canopy sills on the fuselage until they were closer to matching the canopy’s width, and I then followed this with some more sanding and trimming. The canopy itself is thick and its clarity is like a coke bottle. Therefore, I polished it up to see if I could make a difference, and it helped a little. The canopy was attached and masked.

The Cobra was now ready for painting. Since I was doing mine in the Israeli markings, it was painted with Mr. Hobby Olive Drab. I wanted to break up the monotony and simulate sun fading, so within each panel I painted a 50/50 mixture of Olive Drab and Tamiya Yellow Green. Next, I painted the anti-glare panels a faded flat black mixture. Lastly, the toilet exhaust was painted a burnt metallic mixture using Gamer’s Workshop Citadel-brand Chainmail as a base. The Cobra was glossed with Future. Once dry, the decals were applied.

I used Tamiya Dark Wash for all the panel lines, followed by some weathering using a 50/50 mixture of Tamiya Red Brown and German Gray sprayed with a fine-tipped airbrush. Paint chips were simulated using a gray Prismacolor pencil. Next, all the weapons were assembled painted and attached to the weapons wing. The main and tail rotors were painted a cream yellow color first, masked, and then painted faded flat black. Next, I used Citadel Chainmail to paint the rotors hubs, followed by a wash of a grimy watercolor mixture. All other small parts were attached and painted, thus completing the build. The Cobra was given a flat finish, and then the canopy masks were removed.

I am really pleased with the final result. With AZmodel’s kit, it’s not difficult to create a good Cobra that you would be proud enough to enter into contest and add to your collection. It may not have as many bells and whistles as the Special Hobby Cobra, but it will probably build easier and still be comparable. In addition, Pavla offers a clear vacu canopy replacement and Brengun offers a photo-etch set to further enhance your AZmodel Cobra.

I would like to thank UMM-USA for providing this kit and the IPMS/USA Reviewers’ Corps for the opportunity to review and build this AH-1G Huey Cobra.

Detailing Added to the Intakes