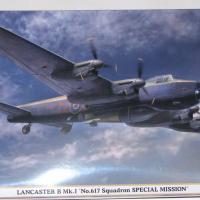 Enough has been written on the Lancaster that I’ll just cover 617 Squadron with a link from the Royal Air Force web site. It is quite an interesting history and for me very informative as other than the “Dambuster” raid I knew very little about this squadron.

Upon opening the box you are presented with a lot of plastic! 16 grey injected plastic sprue of various sizes and 5 sprue of clear, an 8 page fold out instruction sheet and a large, well printed decal sheet make up this kit. The plastic is cleanly molded with recessed and raised detail and not much flash to deal with. The clear parts are very clear with crisp detail and the decals look great and in register.

16 steps make up the construction of this kit starting with the cockpit/bombay area. This kit lacks a lot of detail in the pit as only 7 pieces and 4 decals make up this area (Each of the bombs is made up of 6 parts!) so if you’re wanting that you’ll need to do some scratch work or purchase aftermarket sets. One thing I liked about this kit is the wing spars for the main wing and horizontal stabilizers that make the assemblies so much easier and stronger. After assembling the fuselage you have to decide which version you want, with 3 turrets or just 1 as these are sub-assemblies with some nice detail out-of-box.

The engine nacelles/wings are next and are basic and easy to assemble but once finished the landing gear are added. This is the one area I had trouble with as the instructions are vague and don’t show where the parts go clearly. Part D28 is the main culprit and even after looking online at other builds it took some guesswork as to how it was supposed to fit…..I think I got it right. At this point the instruction call for you to add the wings before the portholes but I decided to do the opposite and was happier for doing so. Clear parts W1-9 (There are 26 total) are small and hard to handle and with the wings on I was afraid of hitting something while twisting and turning the kit attempting to place the windows.

Once the wings are attached it’s all downhill with the props, bombay, tailwheel and some small parts. There are two different bays to choose from and which bomb you want to use will decide which one you need to build but both are pretty straight forward so no big deal here.

I used Testors Model Master Dark Green & Dark Earth for the upper surface and Tamiya Semi-Gloss Black for the lower surface. You are given markings for 3 different aircraft from 617 Squadron:

The decals went on without any problems and with just a little help from Micro-Set.

This is at least the 9th boxing of the Hasegawa Lancaster and it’s still a pretty nice, if not basic, kit of the Lancaster that builds easily and well and I can recommend this to all modelers except the true beginner.

I would like to thank Hasegawa & Hobbico for supplying this kit, the review corps for letting me build it and all of you for reading this……..Model on!!