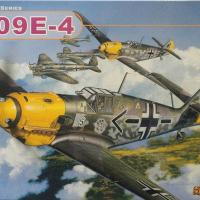 If I could be granted a do-over at this point, I’d take the opportunity to pay closer attention to the engine-to-firewall attachment when I put those parts together. Everything appeared to me to be OK at that point in the assembly, but it turns out that a very minor bow in the right side engine bearer that I really wasn’t paying close attention to was just enough to affect the alignment of the engine’s prop shaft hole and the opening in the front of the engine cowling when I got the cowling pieces closed up. It was minor, but just enough to shift the prop and spinner off center. The lesson here is to be careful to dry fit all of the components that comprise this area if you are going to build your model with the engine cowling closed. (If you are building it with the cowl panels off, a slight misalignment probably will go unnoticed.)

I found it was not possible to shift anything inside the cowling at that point, so I corrected the problem by plugging the hole with a piece of stretched sprue and then drilling a new prop shaft hole so it was centered in the cowl opening.

Before closing up everything, I had been forewarned by a fellow chapter member that it would be nearly impossible to assemble all of the pieces that make up the cowl guns and then get everything to fit inside the closed cowling. With this in mind, I chose not to attach part F-19 to the top of each of the guns (as those parts would not be seen inside the closed cowling), sanded the outside edges of the gun breaches, and then sanded the inside of the top cowl (part A-1) to achieve a thinner thickness. It took some time but, to my surprise, when I tested it, everything fit…guns, cowling and all. So, dry fitting and a little adjusting here and there did pay off. I painted those engine and gun parts that needed it and the interior of the cowling parts before buttoning up everything.

After that, I also airbrushed some color on the outside of the assembled cowling and found everything to be in good order…without the need to add any filler or do any significant rescribing (see the photos below). The rest of the fuselage seams were sanded smooth and restored where necessary (like the top side and underside centerline seam found on the real airframe).

Things were shaping up well, so I turned to the wings and found the only other minor alignment issue that I encountered in this build. After attaching the wing guns and associated panels, I discovered that, if parts C-22 and C-25 were placed in the slots as indicated in the instruction sheet, the leading edge slats could only be attached in the closed position. Since I wanted the slats placed in the open position, I found it necessary to shave off enough of the front edge of the bars with the two mounting pins (actually, I just sanded them) so they could be placed forward in the slots so that enough of the pins protruded, assuring the slats could be attached to them in the open position. So, the watchwords again are: Always dry fit…adjust…dry fit…adjust…then glue things in place.

The fit of the remainder of the wing pieces is excellent. Everything aligns nicely. I used Tamiya thin cement to bond the parts and squeezed out a small bead of soft plastic along the leading edge so only a little smoothing with a sanding stick was needed to achieve a smooth edge. Again, no filler was required. Take note, however, that if there is any squeeze out of plastic along the trailing edge, be sure to check and clear the slots for the PE hinge pins (inserting a sharp #11 blade probably will do the trick).

The fit of the wings to the fuselage wing root fillets was every bit as good as the fit of the various wing parts. The wings attached without the need to add any filler or sanding. They were set in the correct position with the correct dihedral by the mounting bars that are molded into the cockpit floor. The tail planes also fit perfectly, and aligned nicely…no gaps…no filler…no sanding was necessary. The stabilizer bracing struts almost clicked in place. This part of the assembly could not have been any easier or quicker to complete. The model really began to look like a Bf-109.

Since I had placed the control column in a deflected position on purpose, I attached the separate control surfaces in their corresponding deflected positions. Again, just be sure there is no resisting plastic inside the slots where you will be inserting the little PE hinge pins. The pins are something of a nuisance to fiddle with as you place them in position, but they do help keep everything in alignment and look good when assembled. They are not sufficient to hold the control surfaces in a stationary position, but applying a little Tamiya thin cement will do that job.

I had decided in the beginning to finish the model in the markings of Rolf Pingle (I./JG 26, in France, 1940) so, at this point, I masked and painted the fuselage, wings and horizontal tail planes. I painted and decaled the rudder as a separate piece and left it to be attached later. I also painted the prop blades and hub pieces separately, masked and painted the ace’s unique blue and white striped prop spinner (part A-9…not J-19), and then assembled the whole thing as a separate unit to be attached later. Before going further with the assembly, I spent considerable time simulating the rather heavy mottling of RLM 71and 02 that was applied to the RLM 65 on the sides of the fuselage (You might know I had to pick one of the most time-consuming schemes in the kit to replicate). Using Gunze Mr. Color acrylic lacquer made the process go a little faster because the paint dries quickly and airbrushing thin coats tends to cover and blend nicely, depending on the amount of thinner and clear that is added to the mix. The results looked convincing to me.

Wheels, landing gear, and tail wheel parts were then painted, assembled, and set aside (the individual molded brake lines are nice and add much to the detail). Everything received a light coat of Future, decals were applied, and a final coat of Future sealed everything. Then, I fitted the landing gear, confirming the unique alignment of the legs and wheels, and attached the pre-assembled tail wheel unit.

Clear parts were masked and painted (inside and out) and given a light coat of Dullcoat before the masks were removed. The windscreen and rear canopy section were fitted and attached with white glue, followed by a little Future along the seams to assure everything was sealed. A word of caution here: dry fit the windscreen and determine if it will be necessary to sand or scrape (lightly) the bottom edges where they meet the cockpit sill to be sure the top front edge does not stand proud of the panel it will butt up against…or, you may find yourself spending a little time trying to sand down that area to avoid a step where there shouldn’t be one. I added the PE sill plate and positioned the hinged center canopy piece in the open position. Fitting it between the windscreen and the rear portion required a slight bit of sanding along the mating surfaces to assure a kiss fit. Another word of caution: don’t attach the pilot’s armor panel to the cockpit sill as the instructions would have you do, if you are building the model with the canopy open. The armor plate was attached to the hinged canopy frame, not to the fuselage I attached the remaining bits, like the canopy cable, pitot, antenna post, and antenna wire, then covered the clear parts and gave the aircraft a light spray of Dullcoat overall.

So, to recap, when beginning this kit I recommend the following:

The photos below show how things looked during assembly and how well everything turned out. After my struggle with the front-end alignment and with fitting everything inside the closed cowling, the rest of the build was a pleasure. As I said at the end of Part 1, I can recommend this kit to anyone with a few kits under his (or her) belt. It’s not a kit I’d suggest for the beginner and not one that can be built very well in a few weeks by most of us…unless you don’t have a life. But, in the end, with patience it does result in a model you will be proud of…a very nice 1/32 replica of a Bf-109E-4...and maybe the most accurate.

I liked it so much I actually bought another kit when this one was almost finished.

My thanks go to IPMS/USA and DragonUSA (Cyber Hobby) for the opportunity to build and review this kit.