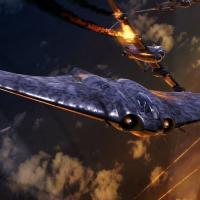 I’m a sucker for Luftwaffe ’46 concepts and 1/144 scale, so when Brengun supplied us with this little bat winged beauty my hand went up immediately.

The kit is petite, very nicely molded and with fine panel lines. Two color schemes are provided on the box, both for hypothetical units serving in 1946. The canopy is a little thick, but there isn’t much of a cockpit provided. I added paper seat belts and a stretched sprue control stick; you could go further if you chose to add some detail.

I thinned all of the landing gear doors and used my fine engraving saw to separate the control surface joints. Assembly is easily completed in a few hours; I spent more time painting and decaling than I did building. I removed the molded-in cannon from the wing leading edges and drilled out the area to accept some sprue – but in looking at my review photos I realize that I forgot to add them…..but I did add a pitot tube using guitar wire.

The landing gear assembly isn’t clearly defined in the instructions but I eventually made it work. I painted the lower surface in Vallejo Air Black and used a recently supplied set of review paints from Model Car World Military Finishes (MCW) for the RLM 75/76 upper surfaces (see my separate review of these fine paints). A coat of Pledge Multi Surface Finish gave me a gloss base to add the few decals. I scavenged two swastikas from an old SuperScale International sheet and added them to the rear fuselage area. I masked the exhaust troughs and painted them in Model Master Titanium.

I carefully drilled out a very small hole in the nose, and used the micro saw blade to cut a small groove into the tail. I very, very carefully removed and folded the radar antennae into shape. The front aerials require supergluing two p/e parts together and then doing a lot of origami to get the cruciform dipole shape of that array; several new swear word combinations were invented while I performed microsurgery trying to get everything aligned. Next time I think I would fold the individual parts first and then attach them to each other.

A coat of Testor’s semi gloss acrylic finished the project. I really like the diminutive, stealthy shape of what might have been an invisible killer in the night.

Thanks to Brengun for the opportunity to build this unique prototype.