The Baron and his Funfdecker Fokker 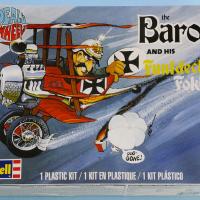 ‘The Baron and his Funfdecker Fokker’ is a re-release of the classic H-190 kit that was released in 1971. It has been re-released through the years several times as kit number 7236 and now here as 1735. This kit was originally part of the Deal’s Wheels (named after artist Dave Deal) series that primarily focused on car caricatures (13 of them), but a companion kit was issued with it under the title ‘Lucky Pierre of the Lafayette Escadrille’ featuring Pierre hanging on to the upper wing of an inverted Nieuport 17. There were also two WWII era airplane caricatures with the ‘Weiner Moldy and his Blown Messa-Schnitzel 109’ and ‘Flt. Lft. Rif Raf & his Spitsfire’. Now, less you think, that these might not have been real, there were actually four show cars produced as life-sized versions of Dave Deal’s model designs. If you get bored, check out the website: http://treswright.vervehosting.com/ .

The kit is molded in bright red styrene on four trees and a fifth tree of chromed parts. The decals consist of iron crosses and three kill markings in the form of a doghouse. Total part count is fifty with nine decals. There are two options included in the instructions, with a blown 426 V8 engine or with just the rotary engine alone. The one piece instruction sheet is folded into quarters and provides graphic depiction of the assembly as well as humorous text call outs in seven steps. This kit is recommended for ages 12 years and up, although I’m sure younger kids would have very little problem as the fit is not too bad. The propeller has a retainer cap, and if you can avoid gluing the shaft, it rotates reasonably well. If you want to add more detail, you could borrow some parts from your spare 1/28 WWI kits.

You can build this easy or you can build this the hard way. If you are building this kit as a relief from AMS; the good news, it that it can go together relatively quickly. If you want to go hard at, bring out your filler and sanding sticks, because you are in for a battle. All five wings of this funfdecker have injector pin marks on the bottom side of the wings. If you are building AMS – Free, this is easy since they are all under the wings and won’t easily be seen. If you are building this the hard way, you will want to fill and sand these injector pin marks because: A) You know they are there, or B) The contest judge picks up the mode l to look, or C) You elect to use a mirror base. You will also want to fix the pilot since his caricature is sort of split vertically, you will need to use some filler to fill in the gaps between halves.

I was surprised that the flash on this kit was barely present, especially for a kit this old. A couple of swipes with the sanding stick took care of this issue.

After filling and sanding, I assembled all of the parts that would end up being red. I then assembled both main wheels and the chrome parts that would need to be glued together. I primed the main airframe assembly and that painted with Vallejo German Red. The main wheels were primed and then painted Vallejo Metal Colors Aluminum. The Tires were then painted with Vallejo Dark German Grey. The 426 Engine Block was primed and shot with Vallejo Metal Colors Silver. I left the oil pan in Silver and then painted the iron block portion in Vallejo German Orange. The propeller blade is painted in several shades of Vallejo browns followed up with a brushing of Vallejo Transparent Orange. The propeller tip guards are in Vallejo brass. The Baron was primed and then painted in a variety of Vallejo browns for the moustache, eyebrows, and hair while the face was painted in a variety of Vallejo flesh tones. The iron cross is in Vallejo Prussian Blue.

Decaling was up next. Except for the wing top crosses, I had no problems with the decals. They are relatively thick and settled down with Solvaset with no problem. The upper wing decals were a self-inflicted problem. The decal glue started adhering before I had all the decal situated causing a few ripples that so far have refused to lie down.

Final assembly was easy with super glue and took no more than ten minutes.

The Revell ‘The Baron and his Funfdecker Fokker’ is a relatively simple kit with no major fit issues other than pilot. A teenager could easily assemble this model quickly without painting as the parts fit fairly tight. Indeed, the main wheels are not glued on, nor is the 426 V8 engine to the airframe. Overall it was a fun diversion and my wife thought it was ‘cute’. Now where is that darned Snoopy!

My thanks to Revell and IPMS/USA for the chance to review this great kit.

Hi' does anybody know where a could get a set of decals.  thank you.  Dennis