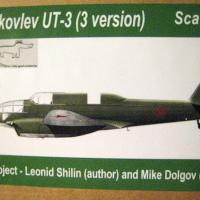 The Yakovlev UT-3 was designed as a training aircraft to offer instruction to pilots of multi-engined aircraft, gunners, bombardiers, and radio operators. Construction was mainly of wood, with fabric covering and some steel tubing. Imported French Renault 6Q engines were used on the prototypes, but production models probably had a Voronezh MV-6, a Russian copy of the French powerplant. The prototypes first flew in 1938, and some were equipped with armament, 7.62 mm machine guns and bombs, but production models were unarmed. Production began at two plants, No. 272 at Kazan, and No. 135 at Leningrad. Only a small number, around thirty, had been produced when the authorities decided to use combat aircraft for this type of training, so further production was cancelled.

There were numerous variants thought about or only produced in prototype form, including some with twin rudders, and some had fixed landing gear while other had retractable units. Most of the variants had only one or two prototypes, and only one civil transport version was built, with seats for two crew members and five passengers. There is really little information available on this aircraft, even on line, although several publications, especially Bill Gunston’s The Osprey Encyclopedia of Russian Aircraft, 1875-1995, provide information on the type.

The kit comes in a plain brown box with little marking except for a title, Yakovlev UT-3 (3 version) Scale 1/72, and the originators of the kit, Project: Leonid Shilin (author) and Mike Dolgov (master). The Brand name, Croco, appears in very small print, along with a crocodile cartoon. The box has almost no information other than that.

The instruction sheet is 8 ¼” by 5 ¾” in size, containing exploded assembly drawings, viewed from above and below the model, showing how the parts are to be assembled. Part numbers appear in the drawings, but these are not identified anywhere else. There is no other information. I recall reviewing my first Croco kit, a Miles M.8 “Peregrine” and remember the same problems, a lack of information provided with the kit, and since Croco tends to produce kits of unusual and little known airplanes, this can present a problem. There are no three view drawing except for the side view on the box, and no indication as to whether the landing gear should be retracted, lowered, or fixed in position, and there is very little information as to the seat positions. Of course, interior colors require total guesswork.

There is a decal sheet included, and this includes ten red stars, some with white outlines, and four red trim stripes, probably for the engine nacelles, although there is no reference to this on the box art or instructions. The decals are of very good quality, and do not require trimming.

All in all, the whole thing makes up into an attractive little airplane, and the nice thing is that it is one that has probably never been made into a kit before. But the instructions certainly were only moderately helpful, and much more information should have been provided.

The kit consists of almost 40 resin parts, and three vacuformed clear plastic parts, including the cockpit canopy, nose transparency, and several small triangular pieces for the front windows on the fuselage sides. I just filled these in with white glue, but the vacuform parts were quite well done. There are extras in case you screw one up.

The resin cast parts had adequate surface detail, and required only a small amount of trimming. The problem with the resin parts is that apparently some kind of chemical was used to prevent the resin from sticking to the molds, and all of the parts need to be soaked and washed in a strong liquid detergent to remove this material. Otherwise, paint will not stick to it, and I found that parts had a strong tendency to slip out of my hands because of the slippery surface of the parts. Even after washing the parts, I found that acrylic paint did not adhere well to the surface, and that a lot of touch up painting was required.

However, assembly was quite easy. The wings came in three parts, with the outer panels attaching to the center section assuring the correct dihedral angle. Mold attachment marks needed to be removed, and in a few cases, filled in. Some filler was required to fill in gaps, but there wasn’t a lot of surface detail that needed to be protected. I used super glue for all of the assembly, and it seems to be holding pretty well. The tail assembly looked like it would be a problem, with very small mounting tabs, but they mounted easily and are very secure. The engine nacelles are a bit dicey to attach, but while they needed some filler, they fit in nicely, and the engine cowlings slid right into position with little problem. The propellers, however, were a different issue. They consisted of four blades and two spinners. The idea was to glue a blade to each side of the spinner. Apparently, the props rotated British style, opposite to the American rotation, and the blades didn’t look too good. I tried, but ended up using the props from a scrapped Airfix Avro Anson, which were about the right size and the correct rotation. They had no spinners though, but then all airplanes that were built with prop spinners didn’t always use them. They look convincing, and since due to lack of information I can’t really say that I am building a model of a specific airplane, I was satisfied with the result.

The finishing touches on this model are somewhat strange. The landing gear on the box art shows a retractable gear, while some of the information I found online states that some of these planes had fixed gear. However, the box art shows retractable. The instruction sheet shows both landing gear doors closed and in the up position, with a small bracing strut running from the rear of the main gear strut to a position along the center line of the gear doors. The instructions actually say to glue the doors together in the closed position and attach them as if they were closed. I ended up leaving the gear doors open and constructing a longer bracing strut to support the main gear struts. The gear doors would have to be trimmed in front to get them to fit anyway, and there may be a reference on the bottom instruction drawings, although I could not read that particular language. (It looked like Russian). I can think of no reason why designers of this type of airplane would create such a complicated retractable landing gear assembly that allows the doors to fold up and a strut to run through them to brace the main gear strut. There would be no point in this.

This is the third issue by Croco of a model of this airplane, versions 1 and 2 coming before this one. There are reviews of these kits online, but they are really not very helpful for the above mentioned reasons.

One problem I noticed was that the fuselage top cover, Part No. 17, is provided as a long cover which is attached behind the cockpit windows and runs to a position near the rear of the cabin. The drawings tend to hint that there should be an open space about 4 feet long, but without any trimming, and actual space is less than a foot. I don’t know how this happened, but it should have been mentioned in the instruction sheet, regardless of the language.

When almost finished, I trimmed the vacuform canopy parts and glued them onto the fuselage with super glue. I trimmed masking tape and taped over the windows, masking off the clear parts. For the triangular windows in the nose section, I filled them in with white glue. You can’t see anything inside through those windows, but there isn’t anything to see anyway, as the total interior detail consists of three seats, an instrument panel, two rudder pedals, and control wheel assembly. I was rather surprised that the kit included three small venturi tubes and a very nice tailwheel. However, there is a rear step that shows on the box art and in what few photos are available, and this is not included. I had to add this.

Once the model was assembled and filled in, I painted it. I have been using acrylic paint recently, and have found it to be a little harder to work with than regular enamels. After several heavy washes with detergent, my spray painting of the basic airframe seemed to work, although some of the paint came off when I removed the masking tape, and I had to do some touch up. When I finished my painting, I sprayed the whole thing with Glosscote, and then applied the kit decals. They were on easily, and then I took care of the small details. For some reason I was unable to locate the positions of the pitot tube for the airspeed indicator and there doesn’t seem to be a photo available that shows the position of any radio antenna mast. Certainly, these planes carried radios, but there is no indication where the equipment would have been. So mine is non-radio equipped. Less stuff to go wrong.

This is not a kit for beginners. It requires a certain amount of skill, and a lot of patience. However, you will wind up with a model of an airplane you’ve never heard of before, and it will look nice on you model shelves next to other obscure Russian aircraft. Get one of these and try it. You are likely to come out with a very nice model. Recommended, with reservations.

Thanks to Croco Models for the review copy.