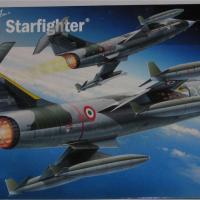 The F-104 Starfighter was one of the most famous and long lasting aircraft in history. Entering service with the USAF in the 50s, variants of the F-104 flew into the mid-2000s. The G model was manufactured under license in several NATO countries was used as a multi role fighter-bomber due to its increased range and load capacity. The 104S is an upgraded version that the Italian Air force flew until replaced by the Eurofighter Typhoon.

Upon opening a very large box you are presented with an enormous amount of plastic, 6 sprues of grey injected molded plastic, 1 sprue of clear parts, 1 small fret of photo etch, 2 large decal sheets, 1 photo reference book and a 47 page instruction manual. The plastic is flash free but the mold seam lines are a little thick and need some sanding. One thing to note is that my copy at least had panel lines heavier on one side of the fuselage than the other so be aware of that. The canopy parts are thin and clear but the light covers had small bubbles of varying size in the center of most of mine. The P/E fret is a bit on the thick side and the small parts are a somewhat hard to bend. The decals are very nice and in register. The kit can be built as a G, CL-90, S-CB or S-ASA so you are given extra parts that are version specific. Also included are two types of external tanks and 3 different missiles for different load outs and as an added bonus parts for an engine maintenance stand, boarding ladder and tail stand.

The first 4 steps are for the ejection seats and you need to decide here which version you are going to build. (You are given 2 options, Martin Baker or Stanley/Lockheed). Each seat is made up of 10 plastic parts and 6 P/E belts. When finished the seats look ok but in my opinion need more detail. (look at a picture of one of these and you will understand what I mean)Steps 5-10 are for the cockpit tub and is made up of 10 parts plus your finished seat but the detail is, in my opinion, lacking and in a kit of this size it stands out. You are given the option of using photo etch for the control panel and consoles but be advised that the P/E is smooth while the plastic has raised detail so I decided to not use the P/E. Next was the landing gear & wheel bay and engine assembly and while somewhat delicate, the landing gear was fairly easy to construct. The engine is made up of 14 pieces, simple to build and looks nice when completed. Steps 13-15 are the fuselage assembly and if you did not decide back at the ejection seat on which version you want….you will now! There are different holes to be drilled out for specific versions so you want to pay attention here. You’re also going to have to decide if you want to install the engine or pose it on its maintenance stand. The cockpit, avionics bay behind the cockpit, wheel bay and engine all go in at this time. So far there have been no major fit problems on the kit.

Next up is the nose wheel & bay and it’s a 14 piece affair that’s fairly simple although it looks like it might be a bit fragile if you put too much weight in the nose. The nose wheel looks to have a flat tire which is strange because the oleo strut looks extended, almost like it’s off the ground. Steps 17-20 deal with finishing the fuselage assembly, for example nose wheel sub-assembly, gun sight& anti-glare shield, hatches for electronics bay behind the cockpit (open or closed), Vulcan cannon and some final small bits for the cockpit. A couple things to look out for here are: 1. I left the real small parts like ‘angle of attack vane’ and ‘temperature probe’ off until the very end for fear of knocking them off. 2. Step 19 has a small P/E piece to fold and bend. You are given 3 of these and it took me breaking the first two to realize why you are given 3! BE CAREFUL! On to the cannon and weapons bay and the Vulcan is made up of 8 pieces and looks the part but the bay itself is pretty sparse as far as detail goes. One small problem I found is that when I closed the weapons bay hatches, they ended up somewhat recessed and there was a small gap on the forward hatch. Steps 21 & 22 are the same assembly but different parts and are where you add the proper intakes (There is a difference) and the left side on my sample did not fit well as it left a gap at the rear and was a bit too narrow leaving a small lip at the top.

Steps 23-25 deal with the wings, speed brakes and tail assembly. Please pay attention to these as they also have a few version specific parts to use and depending on which version, more holes to be drilled. The leading edges and flaps are positionable but the contact point for both is small. I decided to pose the air brakes closed and found that they are recessed (like the gun bay) so that is something that will need to be fixed. Steps 27 & 28 are for the engine maintenance & tail stands and these built up nice but for some reason no wheels are supplied for the engine stand. Steps 29-33 are for finishing up the landing gear, wheel bay, underside of the tail and exhaust nozzle. The wheel bay doors went on pretty easy but there is not a lot of contact area and they can get knocked off easily so be careful. I must say that the gear and bay are nice and well detailed and the wheels look ok, but the tires look not so good. Each half of the tire has a recessed tread line in it. The middle tread line is the seam of the two parts and it is much wider & deeper than the other two. I filled them all in and now have slicks and will get some aftermarket ones later. You are given two choices of nozzles and for whatever reason the one used on the G is in the full closed position. (Don’t normally see that on an F-104 sitting on the ground) One problem with the nozzles are the tabs that have to be removed from the inside and it was a pain top clean up.

Steps 34-37 are for the construction and placement of the pylons, external tanks and ordinance. You are given underwing tanks & tip tanks along with AIM 9L, 9B and Aspide missiles. The missiles look ok but are a bit soft on detail and the tanks look nice but have some raised detail that needs to be toned down a bit (not a real big deal). Page 32 of the instructions has a nice front on view of the different loadouts and is very helpful. Steps 38 & 39 are the placement of the canopy and pitot tube and construction of the boarding ladder. Now that the main construction is finished I will say that the construction of this kit was pretty easy for a kit of this size with just a few fit issues.

You are given a choice of 10 marking schemes: 5 Italian, 1 German, 1 Canadian, 1 Hellenic, 1 Netherlands and 1 Belgian with a complete set of stencils for the Air frame, tanks and missiles. I used Alclad ‘Dull Aluminum’ for the underside with Testors Acryl Drab Green and Tamiya Medium Grey for the upper surface and Testors Acryl Light Grey for the nose. Testors non-buffing aluminum was used for the landing gear. The decals are colorful, glossy and printed nicely but the film was a bit thicker than I’m used to. They did not set without a big struggle but Solvaset ultimately won in the end. The markings instructions looked great at first but as I got into placing the stencils the trouble started….at least for me it did. I noticed there were a few decals that had groups of stencils situated on them. I thought that was great as it would make it easier. WRONG! As I looked closer at the instructions it soon appeared that I was going to have separate some of these and place them one at a time as they were not even close to one another. What made it worse is that I had to search real hard on the instructions to find where each one went. Some of the “common” stencils are version specific so you may want to do a bit more research on the one you build.

This is the part I find difficult. This kit goes together well and looks every bit an F-104S and its MSRP is $169 which is on the upper side of most newer releases. If you just want a basic kit that looks like a 104, you can find the older Hasegawa kit at a lower price and much less detail. If you are really into accuracy and want to detail it up, the older Hasegawa kit is an option, and add aftermarket sets to help and those could run $50-100 depending on what you buy. I am sure the aftermarket is going to appear for the Italeri kit and some will need those also. I have found the kit for as little as $115 while the Hasegawa kit can be had for under $60-70. While the Italeri kit is very nice, in the end, it is the modeler’s choice as to how much detail they want and how much they are willing to pay.

I would like to thank Italeri and MRC for this kit, the review corps for letting me build it and all of you for reading this.

Tabs inside Exhaust Nozzle
Previous Next