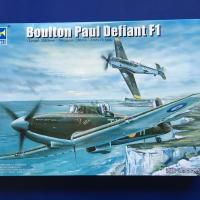 The Defiant is an interesting aircraft and until recently, a largely overlooked subject compared to the popular “mainstream” aircraft from WWII. It has been offered by various model companies like Classic Airframes and Airfix in 1/48 and 172 scale.

This British aircraft was originally intended as a day fighter, with the rear turret harking back to WWI designs that were quite successful in their day. During the early days of the Battle of Britain, the Defiant proved to be vulnerable to head on attacks after BF 109 pilots figured our it had no forward firing, wing mounted guns. The turret had limits to its travel and could not aim the guns low enough while firing forward. The aircraft was also hampered by the significant weight added by the four gun, powered turret, resulting in a less maneuverable platform. It was soon relegated to night fighting duties, where it excelled against the Luftwaffe attempts to bomb Britain at night.

The Trumpeter Kit comes packed in a nice strong box with a very nice picture showing a Defiant gallantly holding off an attacking 109 over the White Cliffs of Dover. One can only imagine the colorful language between the pilot and gunner as they do their best to defend themselves against the more agile 109!!!

Inside the box are two bags containing the grey plastic parts, a third bag with the “glass” and lights, and a fourth bag containing a small photoetch (PE) fret. The instruction booklet is well laid out and easy to follow. There is a separate color sheet with two marking choices.

Construction flows in a logical pattern. There are no real options provided, so the build is kept simple.

The cockpit is detailed enough for what can be seen. It is built up with two detailed side walls, instrument panel and floor/rear bulkhead. Rudder pedals and stick complete this area. I added an Eduard photoetch Sutton harness. As part of the shoulder harness is secured through the middle of the seat back, I made an oval hole and fed that part through. The upper shoulder straps folded over the top of the seat and were all glued in place with super glue. The instrument panel is represented as a decal.

The fuselage and wings construct easily, and fit quite well. The cockpit is sandwiched between the fuselage halves, as is the tail wheel leg. The ailerons, rudder and flaps are separate. The flaps are designed to be installed down, but you could remove the locating tab and attach them up. I left them down for some visual interest. The ailerons and rudder are glued in the neutral position. The tail planes have positive attachments, although I had to adjust one a little, and was one of the only places I used a swipe of filler. Interestingly, there is no option to lower the “turtle deck” behind the turret, or cockpit.

The belly radiator has a PE radiator screen. It is not accurate, but I used it anyway. There is only one screen, so you can look right through the radiator. I scribed the flap as this was provided as a raised panel line.

I left the undercarriage off until after painting. These build up into a fairly sturdy arrangement of legs, retraction struts, and doors.

The highlight of this kit is the turret. It uses two of the three PE parts. One is a support bracket for the oxygen tank for the gunner, and the other is an armored panel to protect the gunner. The gun controls, seat, pedals, sight and framework attach to the turret “ring”. Make sure when mounting the guns that they are elevated enough to clear the deck area behind the cockpit, as well as making it easier to attach the turret canopy. The guns themselves, are very fragile, but nicely detailed with hollowed out barrel ends. The turret fits into its housing snuggly, and needed a little “push” to get it seated.

The decal sheet offers two choices, a day fighter, and a night fighter. As I have a lot of camo on my shelves, I chose the night version with the shark teeth. The decals applied easily and laid down impressively into the recessed panel lines and rivets. A little Micro Sol helped blend them in. The shark mouth decal showed the black outline was off a bit and shows white outside the line. I only noticed this as I was applying the decal. I left it like that for this review, but will carefully mask it and spray some black to hide the white. Some of the other registration/ID letters and numbers had slightly fuzzy edges, where they should have had hard edges.

For the night fighter, I painted the entire aircraft with Model Master aircraft interior black, followed by black around the panel lines. To help weather the paint, I mixed some grey to lighten the black and sprayed that randomly, at low pressure, within panels and control surfaces. I finished up “chipping” the paint with dry brushing aluminum along panel lines, leading edges, crew walkways and access areas. The wheel wells, and gear received a Tamiya Smoke wash. There are no aftermarket canopy masks out yet for this kit, so I masked all the “glass” the old fashion way. We are spoiled these days, aren’t we!!!

To finish up, the cockpit and turret canopies, landing light covers and wing tip navigation lights were installed. The sliding canopy cannot be placed in the open position, only closed. The antennas were glued in their slots, and the propeller pushed into its hole in the nose. The exhausts are attached as individual items, and their ends hollowed out nicely. Exhaust staining was applied with pastel chalks.

This model was a nice relief from more intensive builds I have done recently. It was simple and relatively quick to assemble. It is suitable for a beginner to the seasoned modeler. With the lack of features like ”turtle deck” and open/closed canopy position options, as well as some inaccurate details, the more experienced modeler may be disappointed. Nevertheless, this Trumpeter model certainly portrays the unique look of the Defiant.

Thank you very much to Trumpeter and the folks at IPMS for the opportunity to review and build this model.