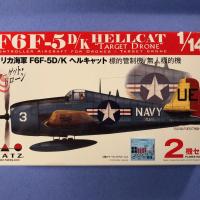 Platz Hobby produces several kits in 1/144 scale (currently 394 to be exact), and I was fortunate enough to receive this two-plane kit for review. In addition to the parts for two aircraft, there are markings for four different planes included. Construction was quick, and the detail is very good for this scale. Modelers familiar with working with small parts should not have issues building this release, and I would highly recommend it.

There have been many releases of the F6F in its variants over the years, so I probably do not need to mention much more on the history of a plane that had over 10,000 copies released during WWII. The dash 5K planes featured in this release were used following WWII as drones, drone controllers, and to tow targets. The final combat missions seen by these planes were as radio-controlled air-to-ground guided weapons used in Korea against well defended targets in the North.

Having previously reviewed a dash 3 Hellcat release from Platz, this release has some similarities. This release also contains a single light gray sprue along with a clear sprue for each plane, while my earlier review had both dash 3 and dash 5 canopies included. Decals are provided for four different aircraft, two of which served in Okinawa in 1958, one from Oceana in 1951, and the last from Point Magu in 1950.

Construction is straight forward, and the only change I made was to add the cockpit seat and control panel prior to gluing the fuselage halves together. While there were what appear to be mold release buttons on the seats, this is very difficult to see once the canopy is in place and the frames are painted. Unlike my previous review sample, this kit included decals for the control panels, which I think is a very nice touch, even though difficult to see (I know it is there). I decided to try out a 1/144 scale pilot figure from Shapeways in one of the planes. These are 3D printed, and I like the look of the installed pilot.

I did have to play with the fit of the canopies a little and the fuel tanks were a little more challenging than my other review as a large piece that would connect the tank to the fuselage is removed per the instructions. This does appear accurate per my reference photos but does require attaching the tanks via six small connection points on the tanks. Not a horrible task, but a little more challenging for a builder if they have less experience.

After painting the interiors and seats with K4 Green Zinc Chromate Primer, I used Stynylrez Tan primer for the VU-5 plane, a custom gray mix for the Oceana plane, and Black for the propellers and anti-glare panels. The engines for both planes were painted with Vallejo Steel and Model Master Acryl Engine Gray, and the tires were painted Vallejo Dark Rubber. The VU-5 plane received K4 Non-Specular Sea Blue and Model Master Acryl Chrome Yellow. The red wing stripes and rudder were decals from the kit, and I used Model Master Lacquer Chevy Engine Red for touch-ups. The Oceana plane received Tru Color High Gloss Sebring Red. I used ScaleFinishes Supergloss before adding decals onto the Non-Specular Sea Blue and sealed the decals on both planes with the same product.

My hits for this release are the level of detail for the scale, the clean moldings and tight fits, and the great markings. While this is not an aircraft I have looked for in the past, I do not recall ever seeing one in a kit until now. I also appreciated having four colorful aircraft to choose from with the included markings, and like the control panel decals.

I did have one miss, and it was the decals. The sheet is only marked with “Platz”, so I do not know if they were manufactured inhouse, or by someone else (Cartograph made the ones for my dash 3 review). While the decals showed no silvering, I had a difficult time attempting to get them to lie down in the panel lines. I started with my typical Micro Set and Micro Sol, but stepped up to Tamiya Strong, Ammo by Mig Decal Fix, and Walthers Solvaset with mixed results. I tried to use the decals for the anti-glare panels (fuselage and cowling) on one plane, but they did not settle well, so I ended up using paint.

As mentioned up front, I would highly recommend this kit to modelers wanting to add a couple of F6F-5K drones to their 1/144 collection as the colorful planes will clearly stand out. Modelers with experience in working with small parts should have no issues with building this kit and adding the decals.

As a special thanks, I appreciate the folks at Tru Color who offered me the High Gloss Sebring Red paint at the IPMS Nationals this year to use specifically on this build. I had my best results by adding a few drops of their thinner to the paint then airbrushing at around 20 psig. I use “odorless” nail polish remover for initial cleaning of my airbrush for this paint followed by Alclad II Airbrush Cleaner. Thanks again guys!