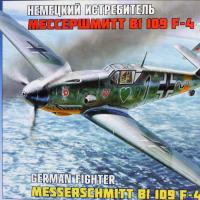 The arrival of the Zvezda Bf-109F-4 has been highly anticipated by this modeler. Having built the Bf-109F-2, I was excited about the possibilities. Packaged in an extremely sturdy cardboard locking-lid box, the kit features a beautiful painting of a JG54 aircraft in combat. This is just an exciting beginning to the model.

Inside the cardboard box, you are treated to three large light grey sprues, two smaller light grey ones, and a sprue of clear parts. There are over 200 parts and they are beautifully rendered, although my lower wings were slightly warped. This would be no big deal, as the upper wings would take care of the warp. The detail is gorgeous and perfectly rendered with no flash anywhere. You get parts for the F-4 and F-4/Trop. A relatively complete engine is included, and you’ll have to use most of it regardless if you have the engine cowlings open or not.

The instructions are broken down into 26 steps. Because of all the options, the instructions are crowded; however, this just means you need to study them before you begin. The other thing that you will need to decide is what configuration you want to do beforehand, and continue that way. You get the option of engine cowling opened or closed. There are three different canopy configurations. Wheels up or down? There are four armament options. You get MG-151/20 underwing cannons, a drop tank, ETC rack and bombs for SC50 and SC 250s. There are plenty of parts that will not be used, a bonus for those of us who model multiple versions of the 109.

This whole kit screams value, except for the decals. The decals are not as crisp as I would like. It appears that they have some color bleed. There are markings for one aircraft from JG54 during two seasons. One of them is quite unique looking, with winter painted on one side and camouflage on the other. If I were going to do this aircraft, I’d have to do some more research to make sure it is accurate, but it is really neat looking. To me, the decals are not a big deal as there are plenty of aftermarket decals out there.

Of course, I could not leave well enough alone and had to add some aftermarket stuff. I chose to use the Eduard Zoom kit for the Bf-109F-2, as it is essentially the same details. I also liked to add some stuff from the Vector Bf-109F-2 update set. This corrects some things in the kit, namely a better center section of canopy, the underside of the ailerons, and the elliptical openings on the spinner. Vector also sells a new flap set which I had to incorporate. Eagle Cal decals were sourced for the markings that I wanted to do.

Unlike most builds, this one begins with the engine assembly. The fit of the engine was superb and perfect. Get used to those terms, as that will be a common theme. As I was building the engine, I was thinking maybe an open cowling wouldn’t be too bad. Once assembled, the engine fits perfectly to the firewall. Everything has positive locking points; however, without the engine bearers the assembly is fragile, so use caution when handling it.

The cockpit was next. This is one of the most complete cockpits in this scale I’ve ever seen. The detail has to be seen to be believed. I loved it. I did elect to add some Eduard to it, just for spice. I used the prepainted instrument panel, which I always love. I used some Krystal Kleer for the dials. The only thing really lacking in the cockpit is the seatbelts. If you add the pilot figure, which is very good, then even that is taken care of. I used the Eduard seatbelts, which had to be modified slightly for the kit. Tamiya Dark Grey was used for RLM66 throughout the cockpit. A wash of Payne’s Grey artist oils followed by a dry brush of RLM 02 and silver brought out the detail.

Zvezda would have you build the tail section separate and add it to the fuselage after completion. I elected to build the right side tail with the right side fuselage section; ditto for the left. This allowed me to position the tail properly. Then it was a matter of flat-sanding the fuselages and joining them when the time came. The fit of the fuselage and all the stuff that goes into it was – wait for it – perfect.

The lower wings, as mentioned earlier, were slightly warped in the box. However, once the wing is built up as it is designed, the warp disappears. The fit of the wings was, again, perfect. One thing that I didn’t like was the inboard flaps had mold release marks. These would have been easily filled, but since I was going to use the Vector flaps this proved a non-issue for me. You can add the flight control surfaces at this time, as they are all provided separately. My aircraft had the later style wing tip lights as on the Gustav, so I deviated from kit instructions. My subject aircraft had no belly tank or gondolas so it was easy to build up the bottom. Those items are provided, along with two style bomb racks. Mating the wings to the fuselage again proved to be a non-issue and the fit was, dare I say it? Perfect.

The engine cowling area is the next thing to build. Here is where I expected issues if there were going to be any, but as you can guess the fit was perfect. Now, I’m not saying I didn’t have the whole nose taped up so that nothing could move, but the fit was perfect and looks great. There was no need for any sanding. I was impressed.

With that, it was time to paint the model. I wiped the model with Polly Scale Plastic-Prep, masked the canopy with Tamiya tape, and then sprayed that area with RLM66. The whole model was then primed in Alclad Grey Primer and microfiller with a Grex airbrush. Surprisingly, there was no need to repair anything. I was ecstatic. Some Tamiya Dark Grey was pre-shaded along panel lines and in areas to break up the monotonous look of certain panels.

I started painting by spraying Tamiya Flat Yellow on the appropriate places with my Tamiya airbrush. Left to dry overnight, it was then taped up and the bottom was sprayed a custom-mixed Tamiya RLM 78. This was followed up by a custom-mixed Tamiya RLM 79. Now came the fun part. I used Gunze RLM 75 to spray the areas that needed it. The key was to get a relatively sharp edge on the fuselage and a softer edge on the wings. I used some masking tape held off the surface for the fuselage and free handed the wings. I was pretty happy with the results. Then it was time to add the Gunze RLM 70, Black Green. Some touch up was required, and for this I used my Iwata airbrush which allowed a perfect line.

A coat of Alclad Gloss was added with my Grex airbrush in preparation for the decals.

I did not like the kit decals and didn’t even try them. I had already decided to use some Eagle Cal decals. These were added with no issues whatsoever. I made a very minor mistake that I dare you to find. Nothing dramatic, it just annoyed me that I messed it up.

A coat of Alclad Flat was sprayed, and with that the weathering could begin.

I started weathering by doing a burnt umber artist oils wash into the panel lines, then dot filtered it on certain areas to break up the colors. This was followed by some oil paints being dotted on the surface. I used buff, titanium white, and some burnt umber in the high traffic areas. These were all then mixed in with a turpenoid damp brush. Once happy with the results, I used a sponge with silver paint for the worn areas of the paint. Some MiG Pigments were used to dirty up the exhausts and the wing root area. Tamiya Soot weathering powder was added to the wing root and exhaust areas.

With that, I was pretty much done. Masks were removed, wheels added, and canopy with antenna put in place.

The model was done. It was one of the most enjoyable models I’ve ever built. Fit was perfect throughout. How does this compare to a Hasegawa kit? Leaps and bounds superior. This is the finest Bf-109F-4 in any scale, in my opinion. I can safely say that this model builds up perfectly with the engine cowling opened or closed.

The aftermarket items fit perfectly. The Vector parts are a really nice addition. The Eduard Zoom set adds the things that you need for this kit. The Eagle Cals were gorgeous. All of them are highly recommended. Vector even has a G-2 conversion set for those so inclined.

This really is a superior kit. It is comparable to Tamiya and Eduard. Despite the large parts count and multiple options, I can say that you will enjoy this build and the results. I know I enjoyed it as a model and as a 109. I’ll be building more of these in the future. I may even sell my Hasegawa F models to buy more. That is how much I enjoyed this kit for ease of building and accuracy.

Thanks to Dragon Models USA and IPMS/USA for the review copy.