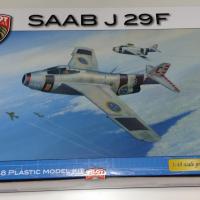 The Saab 29, colloquially called Flygande tunnan (English: "The flying barrel"), was a Swedish fighter designed and manufactured by Saab in the 1940s. It was Sweden's second turbojet-powered combat aircraft, the first being the Saab 21R. Despite its rotund appearance, from which its name derives, the J 29 was a fast and agile aircraft for its era. It served effectively in both fighter and fighter-bomber roles into the 1970s.

The initial prototype of the Saab Tunnan made its first flight on September 1st 1948, with the British test pilot Robert Moore at the controls. The Tunnan was powered by a Swedish license built DeHavilland Ghost DGT3 gas turbine engine named RM2 by company Svenska Flygmotor and armed with 4 powerful Bofors 20 mm aircraft guns. This made the Saab J 29 one of the most modern jet fighter in the world together with the American F-86 Sabre and the Russian MiG 15. The J 29F version include the J 29E version ”dog-tooth” wing and featured the afterburner equipped version of the Ghost/Svenska Flygmotor RM2B engine producing 25% more thrust than the standard RM2 engine. The Saab Tunnan was a fast and agile aircraft, serving effectively both as fighter, fighter-bomber, reconnaissance and target towing aircraft. The fighter version was retired from active service in 1965 in Sweden. This kit depicts the final fighter version J 29F.

This is Pilot Replica’s second 1/48 kit, the first being the Saab J 21A-3, and is a high quality plastic kit that uses steel molds. This kit is clearly designed to handle other variants of the Saab J 29, and indeed, an Austrian version as well as a reconnaissance version have been announced. If you look at the wing sprues, you can spot that the only one sprue attachment point on a part that will not be visible once assembled. The front fuselage halves are similar with only two sprue attachment points, again where the attachments will not be visible. Surface detailing is exquisite. The kit contains photo etched parts as well as high quality decals including full stencils printed by Cartograf & Boa. Surprisingly, there is some flash present, especially on some of the smaller parts (see the control stick photo). I would also note that the review kit had the throttle handle (part 51 – see photo) and the front right corner of the windshield short-shot. I quickly checked the three copies of the kit that I had bought, but did not find either problem in any of the other three kits.

The instruction sheet and the full color printed ”colors and markings” instructions are printed on high quality paper that seems to have a plastic coating. You will want to review the instructions carefully. I chose to get ‘fancy’ and made my build more difficult because of it. Color callouts are included with a generic name, along with FS595, Tamiya, Humbrol, and Vallejo paint call-outs. The two decal sheets provide three markings options:

Overall, the fit is quite tight. If you have built a Wingnut Wings kit, you will understand. You will want to carefully mask parts where they will be glued as the paint thickness can make a difference. I started with the ejection seat and cockpit, although I ended up not installing the ejection seat and joystick until the end of the build (since I could!). I painted up the instrument panel and then applied the instrument panel decal. After a few coatings of Micro-Sol, the decal settled down perfectly over the raised rims of the dials and switches. The detail on the side panels could probably be enhanced a bit, but to be honest, you are going to be hard-pressed to see any of the side panels once installed. Step 4 is where I deviated a bit and installed the lower right nose section by itself just to make sure I got the fit of the panel inserts right. Don’t do it!!!! Follow the instructions and assemble the lower nose section and then add it as a unit. Steps 5 and 6 have you install the main gear bays and the cockpit sills. The cockpit sills add a really nice touch and look great when finished. I packed the upper fuselage nose area with about 24 copper bbs and sealed them in with superglue to make sure this bird sets on its nose wheel. Step 8 has you install the intake assembly and the lower nose assembly. You will want to make sure everything aligns well before the glue sets too well.

Step 9 addresses the rear fuselage. Here is the biggest issue for me in that the exhaust doesn’t exhibit any of the detail the rest of the kit does. Pilot Replicas has already announced a resin seamless intake. I sincerely hope that come out with a similar exhaust that at least looks like a proper afterburner. I looked at using the Hobby Boss afterburner, but it’s clearly to small in diameter. I continued with Step 11 by adding the front windscreen, front combing, and gunsight, leaving off the photo-etch rear view mirrors until the end of the build.

I skipped Steps 12 through 16 that primary concerned the landing gear to jump to Step 17 to assemble the Wings and get them installed on the fuselage to start overall painting. I ended up trapping the ailerons and flaps so they remain movable. The wings have a very positive mount into the fuselage so that getting the proper angle was not an issue – Something more manufacturers could start doing. I saved the pitot tubes and the wingtip lights for the end of the build.

I primed the model with Tamiya gloss black after masking off the cockpit. I painted the rest of the kit with Vallejo acrylics. I used the new Vallejo Metal Color acrylics for all the metalic coats and am very pleased with the result. Their new white aluminum does the trick on matching the base color of the Tunnan aluminum shades. I did not seal the metallic paint prior to decaling since sealing invariably takes away the metallic look. To date, I have not observed any silvering. The decals went on with no issues, although I did use several coats of Micro-Sol to settle them done tight on the metallic finish. The day-glo orange vertical fin decal made me wonder if it would go down properly at all, but it too settled down and looks like it was painted on. I used different shades of Vallejo Metal Color acrylics to highlight the fasteners with a brush. Thinning down the aluminum provided a light wash after the main coat had dried a few days.

While waiting for paint to dry on the airframe, I went back to the landing gear. Applying the torque links was relatively pain free, especially since I found them in my carpet both times they went flying (they are small). The main gear have a good positive fit and the instructions provide a good view of the proper distance between the tire centers (46mm). The front gear was a bit fiddly with the mud guard, but it too installed fine, and the front wheel just popped into the frame. The main gear doors have a nice positive fit. The nose wheel doors are more of a butt-joint, but gave me no real issues. I will note that getting aftermarket metal landing gear may not be a bad thing due to the weight packed in the nose to keep the Tunnan from sitting on its rear. I was impressed with the fit of the clear wingtip navigation lights. I secured them with a dab of Future and they slid right on.

Pilot Replica’s effort here clearly surpasses that of any other Tunnan kit on the market. The first 1/48 Tunnan was Neomega’s resin kit, which had not been improved upon by either the AZ kit with its distorted shapes, nor the Hobby Boss kit with its ~ 1/53 scale. Although the Neomega kit represents the exhaust better and maybe has an advantage of an all resin cockpit, the Pilot Replica’s kit has it beat everywhere else, especially on fit and surface detail. Pilot Replica has already announced a seamless intake. Now if we can just get a proper afterburner section.

My thanks to Pilot Replica’s and IPMS/USA for the chance to review this excellent kit.