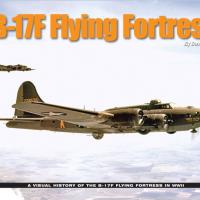 David Doyle’s latest book is with a brand new publisher, G-104 Press. Founded by Scott and Kim Taylor of London, Ontario, this volume follows the Visual History format previously seen from David Doyle’s books from Ampersand. David Doyle has acquired the use of the former Ampersand format along with the inventory and website: http://www.AmpersandPubCo.com . This book is presented in landscape and includes 112 gloss pages. G-104 Press does not yet have a website, but they are planning on one. Presently, the book is sold through David Doyle’s website. Scott and Kim Taylor can be reached through their Thachweave Products webpage at thachweave.tripod.com where they sell some unique modeling products or you can often find them at IPMS and AMPS conventions.

After many years of being published in enthusiast publications focused on military vehicle restorations, David Doyle ‘graduated’ to full-fledged books in 2003. His first book was a hefty 512 page history of US military vehicles. He has now had more than 100 books published in military vehicles, aviation and naval topics. David and his wife Denise have amassed a collection of ten Vietnam era military vehicles that still displays at shows. In June 2015, was honored with the Military Vehicle Preservation Association’s Bart Vanderveen Award, given in recognition of "...the individual who has contributed the most to the historic preservation of military vehicles worldwide." Be sure to check out David’s website at www.DavidDoyleBooks.com where you can see and buy (at a discounted price off of MSRP) all his books that are still available.

David Doyle’s latest book continues to expand on their Visual History format as this edition follows up on David Doyle’s Consolidated B-36 (2015) and Flying Wings (2015). True to the Visual History Series name, the focus of this book in on the visual, detailing the development and service history of the Boeing B-17F Flying Fortress. This edition follows the standard Visual History format with 120 pages packed with large, clear photographs. The cover depicts ‘Mary Ruth’ – Memories of Mobile, on her final flight, just before her loss on a bombing raid on Huls. The back cover features the only remaining flyable B-17F, the Museum of Flight’s ‘Boeing Bee’ flying over Puget Sound. I counted 44 black and white pictures and 155 color photographs.

David Doyle starts with an introduction depicting a short history of the Boeing B-17 Flying Fortress. The well captioned photographs tell the story starting with the B-17E and the improvements that led to the B-17F. David also includes the experimental XB-40 / YB-40 / TB-40 long range escort that was a ‘gunned up’ B-17F. David presents many vintage color photographs to supplement the period black and white photographs to drive the modeling color nuts off their rocker for the first 71 pages. Page 72 starts a full color walk-around of The Museum of Flight’s B-17F, ‘Boeing Bee’. One of only three remaining B-17F Flying Fortresses, and the only one remaining that is flyable, their B-17-70-BO never saw combat except as a movie star. The other two B-17F Flying Fortresses include ‘Homesick Angel’ on display at Offutt AFB in Nebraska, and the ‘Memphis Belle’, currently under restoration for eventually display at the Air Force Museum in Dayton.

The Sections include the following:

This is a gorgeous soft-bound book and is well worth the money. I found the photograph on page 37 quite interesting. The use of aircraft-lifting bags to elevate the aircraft wings for maintenance avoiding damaging the sheet metal and paint, but must have been a chore to keep inflated. This book combines historical photographs with a walk-around of a beautifully restored B-17F. David Doyle’s photograph captions tell the story.