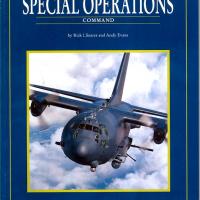 If you’ve ever spent time at Hurlburt Field, Florida, near Mary Esther, and mostly surrounded by Eglin AFB, you probably know something about Air Force Special Operations Command (AFSOC). The first time I was there, they had AC-130s, HH-3s, and MC-130s. Each time I went back they had something new and more esoteric. I haven’t been back since they got the Ospreys, but I’ve seen one fly, and they are a hoot.

This book is aimed at the modeler and aviation enthusiast interested in the less-traveled and publicized areas of the modern Air Force. Each chapter contains a few pages of text, with photographs which illustrate and flesh out the subject of the text. Then come side color profiles of the aircraft, and finally a walk-around showing all those things we’re interested in and those details we can’t find photos of.

The contents are, by chapter:

The text in each chapter is mostly concerned with the differences between different sub-types of each aircraft and the equipment changes and modifications made as capabilities and missions changed. If you’re looking for a “there I was” shoot-‘em-up adventure with AFSOC, you’ll be disappointed. If you want to know what the antenna farm on the bottom of the Combat Talon looks like, be happy, because it’s in there.

Recommended. I bought this book at the IPMS Nationals at Omaha last month. SAM Publications offers a discount to IPMS/USA members, and I couldn’t pass this one up. Sooner or later I’m going to get one of the kits for one of these aircraft out of my stash, and now I’ve got all the reference material I need to build the full-out AMS copy.

Thanks to SAM for having their books at the IPMS Nationals, and to IPMS for allowing me to review the book. Thanks also to my ATM card which provided the cash to buy this book.