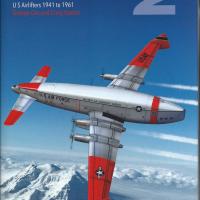 This book is the second in a series on American prototypes and secret projects, the first on cargo aircraft. It covers many different aircraft from WWII types to right up till the early cold war. The authors were granted an unprecedented level of access to the various manufacturers’ archives and the amount of information in the book really shows this! This book covers over 200 designs from the well-known to those beyond obscure.

The book is broken down into nine chapters. The first is a brief overview of the last 80 years of airlift design and usage.

The second chapter covers the design challenges facing aerospace engineers especially when the government demands were outpacing the technology. Everything from wing placement to cargo door size and placement are discussed. Many other factors such as carrying capacity and range are also covered, as are the advantages of prop, turboprop, and jet configurations both real and perceived.

Chapter three covers development of airlifters immediately postwar even though quite a few had their origins during the war. Many familiar as the C-69, C-54 and C-74 and the more obscure; Budd RB-1 Conestoga, C-74 Caravan and Douglas Model 458A that had a swinging tail for cargo loading. I particularly enjoyed the coverage of the bug-eyed Douglas C-74 which is a favorite of mine. Coverage is given to the XC-99, a derivative of the B-36, and the even more massive Kaiser Cargo flying wing (Never heard of this one? Neither had I!), made up a massive 290 ft wingspan capable of carrying 75,600lbs of payload within the wing. One design that I feel had great potential was the XR60 Constitution, but alas, available engine technology could not provide sufficient power.

Chapter five deals with the lessons learned during WWII in overcoming the problems with using converted airliners as airlifters. There are some really bizarre ideas showcased here with the airframes with detachable cargo pods, a Super C-47 with an upward opening tail, or the floating wing concept. These extensions were proposed for the DC-4/C-54 which were attached by chord-wide hinges and allowed to “float up and down” with same wing angle of attack and cargo just inboard of the tips.

Chapter six goes into the development of the heavy airlifter. A Boeing turbo-prop engine and extended cabin C-97 would easily have held several 6-ton 6x6 trucks but was not advanced nor was the gull wing version of the same aircraft. There are many more strange designs in this chapter as well. Various pod carriers and other cargo designs that would have been right at home in a showing of aircraft designed by Burt Rutan! One design that was of particular interest to me was the Douglas XC-132, an extremely large turboprop resembling a cross between an XR-60 Constitution and a C-5.

Chapter seven shows how the jet engine transformed air transportation, airlifting, and the need for aerial refueling. Early jet fighters and bombers were notoriously thirsty and thus inflight refueling was a must and was strongly pushed by SAC. Here the authors cover the many and varied tanker designs from the major manufacturers

Chapter eight covers the first of the modern airlifters. Some designs were converted airliners again but many were new designs with many of the features we have come to see in airlifters today: tail loading ramps, clamshell doors, larger cargo side doors, kneeling landing gear and such! The chapter ends with coverage of the C-141 and several of the proposed supersonic transport designs.

The last chapter covers the small and lighter airlifters. The big boys can’t get into everywhere delivery is needed. So here designs such as the C-123, DHC Caribou as well as VTOL lifters are covered and discussed.

This is a very good book! The amount of research work put in the archives by the authors really shows! If you like the regular cargo aircraft, the weird, the unusual, and the downright wacky, you will love this book! I can recommend this book to all. Anyone that has an interest in cargo aviation, prototypes, and what-ifs will find something of interest in this book. The book can be purchased from the website above or by calling 1-800-895-4585. A shipping and handling fee is applied to each order.