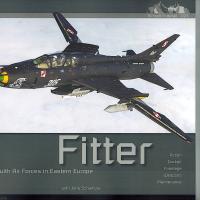 The book is divided into sections by parts of the Su-22 aircraft. The first 4 pages are dedicated to the types of Su-22 used by several Eastern European Air Forces. Samples include planes from the Soviet Union, Germany, Poland, and the Czech Republic.

Next the book goes into the different parts of the airplane:

The photos cover every imaginable part of the plane. All the pictures are clear and in register. The cockpit section is a joy to look at. You will find every light, switch, control stick, as well as wires and very good pictures of the ejection seat. The sample in the book appears to be a trainer as it has a rear cockpit, and this is well detailed. The landing gear pictures are wonderful to see. They show the landing gear bays, as well as every detail in the actual landing gears. Such as how they are attached to the wings and body, all the lines- both electrical and brake lines. The landing gear doors are well described and photographed.

The book is a great source of information for any modeler who would like to detail the plane. It is my belief that the authors took pictures of every single part of the plane including every single bay and they were opened for the book. You have photos of the avionics and engine access panels.

The book was a pleasure to review and is probably one of the best texts I have seen describing an airplane. My thanks to Casemate Publishers and HMH Publications for allowing me to review the book.