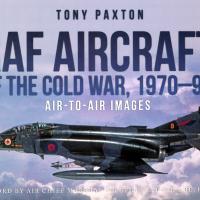 Subtitled ‘Air-to-Air Images,’ this book by Key Publishing is a photographic collection of such images of the RAF during the Seventies and Eighties, a period marked by tensions between NATO and the Warsaw Pact in which the RAF was a major player in the defense of Western Europe through its forces in the UK and West Germany.

Author Tony Paxton was a frontline RAF fighter pilot and was seemingly never without his camera, as all the 200 or so photos in this book are all by his hand. Most are of excellent quality, given the limitations of film types of the period, and many are produced full page and in full colour.

The book is divided into a number of chapters, starting with a brief introduction to the Cold War and continuing with various aspects of the RAF. Generally these concentrate on a specific role or aircraft type. As such, the reader will find coverage of such types as the Tornado, Phantom, Lightning, Harrier and VC10 amongst many others.

Each chapter includes much detail of RAF ops during the Cold War, some of which the author is able to colour with his own perspective as a serving frontline officer. Paxton writes with authority and is able to explain clearly and without too many of the acronyms that can plague some books on modern aviation. However, some of the photo captions are a little perfunctory and I would have appreciated a little more detail of what is shown.

A slight criticism is that due to the author’s role as a fighter/ground attack pilot there are very few photos of support types, such as the trainer and helicopter fleets that were a vital part of RAF operations. Nevertheless, this is a minor point, and the book is, overall, good value.

My particular thanks to Daniel at Casemate for making possible the review of this book.