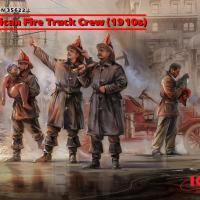 Despite the war, ICM in the Ukraine continues to create new and innovative kits for the avid figure modeler. This set, which depicts American firemen from the turn of the last century, is a case in point. Professional firefighting units organized along paramilitary lines first came on the scene around the 1850s, and by the 1900s were equipped in what is now considered classic firefighter uniforms, with their distinctive headgear and rubberized coats and boots. This set represents the more common types of clothing, including both the long and short coats as well as the heavy canvas pants. The figures come on a single sprue with two sprues hosting their fire axes and three-part helmets.

Basic construction of these figures is relatively straight-forward, with the long coats being provided as two-part skirts. These will require a little filling along the seams. Otherwise no putty should be required if you assemble them carefully. More complex are the two figures that feature rescued victims, one a cat and the other an unconscious boy. These assemblies are further complicated by the lack of clear instructions, and some fiddling is necessary to get them to fit together well. The cat is supposed to be seated inside a helmet, and I believe I turned the figure around in my own assembly. I reality, the head should face the rear of the helmet rather than the front for a better fit.

The boy is also complicated, so care is needed in this assembly as well. The boy’s left arm should be up against the chest of the firefighter. Feel free to use the supplied pictures to see how it goes together.

As far as equipment, the only supplied equipment is the fire axes and helmets. Only one axe is actually required, and I found it easiest to assemble the helmets on the sprue and paint them separately from the figures.

As far as diorama potential, I could find no logical way to place them all together in one scenario. Two figures can stand together discussing the fire. Another firefighter carries a rescue victim and then the last has the cat (possibly rescued from a tree), for a total of three different vignettes. As for appropriate firefighting equipment of the era, ICM offers a lovely little Model T fire truck, but for anything else you might have to delve into diecast models.

In any case, I really liked this set of figures. They have genuinely appealing poses and will fit into a number of potential early American scenes you might want to create. I’m always delighted when a new set of civilian figures comes on the market, and these are lovely. Kudos to ICM for such an interesting subject – highly recommended.

As always, thanks to IPMS/USA for a chance to add these to my collection, and to ICM for creating such wonderful material under unbelievably challenging conditions. Long live Ukraine, and stay safe, fellow modelers!