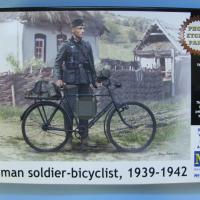 If you read my previous review on Master Box Limited’s release of the German Army bicycle (kit 35165), some of this will look familiar. If you are looking to add something unique to your collection of 1/35 scale German military vehicles, or to spice up your next diorama, Master Box Limited has now released their bicycle kit with a rider figure. Although it is a challenging build, those modelers with photo etch parts experience will be able to turn out one of the rarely seen implements used by the German Army throughout World War 2.

As the onset of WWII approached, most nations were putting the simple bicycle to use as a means of faster transportation for troops and messengers that did not rely on anything but the power of the rider. In researching my build, I found a multitude of online photographs of bicycles in numerous settings, and carrying various loads. As part of the German “blitzkrieg” offense, bicycles provided a convenient way to move troops without the expense of using motorized vehicles. Although there were variants purposely built for the use of the Army, there were also civilian variants that saw service in order to provide even more bicycles when manufacturers could not keep up with the demand.

Although unintimidating when opening the box, the diminutive bicycle is a little bit of a challenge and I would highly recommend having experience with photo-etched parts prior to taking on this kit. The kit consists of two connected plastic sprues with twenty-two parts for the bicycle and weapons, a separate sprue with eighteen parts for the figure, a photo etch fret with thirty-eight items, and a single sheet of paper with directions on one side, and part layouts and a brief history in four languages on the other. The plastic is medium gray in color, and can be fragile due to its brittleness. A nice addition to the new release is a photograph on the back of the box of an actual bicycle like the one represented in this kit.

When I built this kit, I decided to utilize the plastic rear wheel rack instead of the photoetched one; I rounded off the edges in an attempt to make it appear to be made of tubular steel. I also hollowed out the front light, painted the inside Alclad Chrome, then added a front lens using a punch and die set and a thin sheet of clear plastic.

As far as my hits are concerned, this is the best bicycle kit that I have come across, but it is only the second one that I have built, the other being from Tamiya. The photo-etched parts add a great deal of realism, and the plastic parts have a great level of detail in them. The choices of weapons carried include a mine, hand grenade case, MG-34, 7.92 mm ammunition can, or pair of panzerfausts (but these would not be appropriate for the 1939 to 1942 period). The added figure is very well molded, and required minimal clean up on the mold seams.

For misses, I would again have to start with the directions, as it is difficult to tell in the small line drawings where some parts are meant to connect, and some parts are not mentioned, such as one of the pedals (A4 specifically). I would have thought that knowing the plastic was brittle would have saved me this time, but I still managed to break a crank arm when removing it from the sprue. Fortunately, I was able to salvage it, and did not damage the other one when removing it from the sprue.

During my research for the first bicycle build, I found photos showing two rear wheel racks, one being a frame similar to the one replicated using the photo-etched parts, the other being of a tubular construction. I am still uncertain as to how the inner spoken wheels are intended to attach to the tires. For this build, and with my experience from the first bike in mind, I simply attached the outer circumference of the wheels to the inner circumference of the tires, and did not force them inside.

In conclusion, I would highly recommend this kit to modelers wanting to add a unique mode of transportation to the WWII collection, or to a diorama, but emphasize the importance of having PE experience to avoid possible frustration. As I mentioned, this is the best bicycle kit that I am aware of in this scale, and in the right hands, can be a very attractive build. The figure included is a definite bonus, and prevents the modeler from having to find or create a figure to pose with the bicycle.

My thanks to the folks at Dragon Models USA for providing this review kit to the IPMS-USA, to Dave Morrissette, who runs the Review Corps, for allowing me the opportunity to appraise it, and of course my appreciation to all who take the time to read my comments.

Right and front of bike

Right side of bike