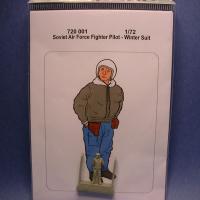 A wonderfully detailed 1/72 Soviet air force pilot! He stands in a blue flight suit, leather jacket, leather boots, sidearm, and white flight helmet. His arms are crossed behind him. One imagines him attending a pre-flight briefing or a post-flight discussion, or posing proudly beside his aircraft while someone snaps a photo. Be sure to add some snow at the edge of the tarmac!

The figure arrived in a clear package with insert. It is a single piece on its resin casting block. All you have to do is carefully remove it from the casting block and perform some light cleanup. There was some flash around his hands and under his nose, but the mold seam was easily cleaned up.

On the insert you’ll find a simple color illustration with paint suggestions. No specific paint manufacturer is suggested. Refer to references for correct colors.

The figure is a scaled down version of its 1/48 scale counterpart (product/stock # 480 066), which—at least for me—would be a lot easier to paint! Don’t be fooled by my clumsy finish, however. This is a finely detailed figure!

Thank you to Aires/Aerobonus for a nice resin figure and to IPMS USA for the opportunity to review it.

Finished Pilot Back
Previous Next