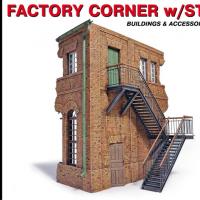 This kit is composed of 12 sprues of injection molded plastic containing 219 parts plus 4 vacuum-formed sheets. The vacuform represent the building sides, two sheets for each of the 2 building sides. For those familiar with MiniArt kits, the sprues containing the parts for the stairs are the same ones contained in many of their kits, and this time they will be assembled in another one of the many ways they go together. Brilliant production work!

This kit builds up to a spectacular diorama base, but much care needs to be taken during its construction as it is very fragile. I recommend reading the entire review before starting on the kit as there are a number of issues upon which the instructions do not touch that need thought before you apply the glue.

I started with the vacuformed sheets. The detail of the brickwork and windows is fabulous, but the edges are very rough and difficult to match up when the two halves of each of the walls finally go together. The bulk of my time with this kit consisted of dealing with this seam. I have one issue with the vacuforming process, which may have been confined to this kit alone. One sheet had a wavy portion in the wall, showing it upon assembly to be bowing out. This drastically affected the attachment of the drainpipe late in the construction. I was not successful in fully fixing it. On a ruined building, it shows just like the brickwork is collapsing, so it is not all bad.

After you get each side of the building together, it is important to test fit the window frames and doors and sills prior to attaching them to each other. There are either small piles of debris or vacforming imperfections in the corners of most of the window and door frames, so a dry fit here is mandatory. Leave what you can as it increases the realism, but the frames should fit well even in a ruined building.

An interruption for a word here about final assembly: the building sides, window and door frames, gutter and drainpipe, and the stair landings all have good attachment points to each other and to the building where needed. However, the two flights of stairs have very limited attachment areas where they meet the landings. As the upper one does not sit flush with the brickwork as built, you cannot just glue it directly to the building side or the handrails will not fit together. I was not able to solve this problem satisfactorily, but my experiences allow me to make 3 recommendations: first, don’t swear in the presence of a 6-year-old or you’re liable to spend the night in the garage. Second, shorten the landing platforms so that the staircase does fit flush with the brickwork and then secure the intervening flight directly to the building face. Third, drill holes in the building for supporting ironwork, which would secure the sides of the upper staircase flight directly to the face of the building. I think either of the last two ways would work for the upper staircase, and the only solution to the attachment of the lower flight is to secure it to the base as well as the platform to provide stabilization. These are welded joints, and as one can’t reasonably solder plastic, well, it is an issue. I am sorry I didn’t think about these methods until it came time for final assembly and I couldn’t keep the flights of stairs together long enough to get the completed kit into my photo booth!

However, now we leave the building itself and go back to the rest of the kit. Having done the dry fit of the windows and doors, marked and drilled the drainpipe, and decided upon how to attach the stair flights, it’s now time for the fun part. Glue the 2 building sides together, and regular styrene cement is good enough here. There is an excellent mating surface for the corner, and it fits with only a modicum of fixing at the top and bottom. The bond is so strong that my example survived several “oopses” when I dropped it onto carpet and linoleum from a standing position.

I painted the building with craft acrylics, choosing a lighter ochre base for the bricks than the box art. I picked out a few bricks in reds and browns, and confined weathering to a burnt umber oil wash and matte clear coat. The inclusion of the remnants of plaster on the interior wall, and holes for attachment of the second floor supports, make this a very real building façade. When I get around to fixing this building to a base, I will of course add debris and blend with pigments, and spray the whole thing with a light coat of dust.

So much for the building, on to the accoutrements! There are more windows, shutters, and associated fittings (and a couple of fence sections and wooden box sides!) than are needed, giving you options to vary your scene. I painted all of them before assembly, including some dry-brush weathering, and have included a picture of the main variety before assembly to show how much variation is in the box. I chose a dark blue for the trim, medium wood color, and black for the fence. A diorama could have lots of miscellaneous debris without robbing another kit. Addition of cellophane or thin clear plastic sheet is another option. I found the door handles a bit clunky, and would probably replace them with doll house hardware or something locally manufactured from wire. By the time I got to them, I was so far behind I had no time to get fancy, so you see what was in the box.

The landing platforms go together solidly, but the handrails must be surgically altered to make the proper corners. Be careful here as the individual hand rails have many sprue attachment points (up to 14), and I snapped a few of the surviving newels during the corner surgery. Luckily, you have a few extras upon which to practice.

The stairs themselves present a challenge. Each step must be cut in half, and as the marking for the cut is on the underside, in a I_I shaped trench, you will need a jig. If the cut is not on the mark or is crooked, so will your stairs be a bit wonky. I used my trusty razor saw and miter box, and didn’t do too badly. The steps assemble well, and each flight is sturdy. I painted them prior to final assembly, as they are so fragile then. I chose a red lead primer, and a light blond color for the wooden handrails. The box art shows a different option.

I chose to show one door closed and one door open, as on the box art. For the closed door, I glued the frame pieces onto the door and fit the entire assembly. That seemed to work pretty well.

This was for me a very challenging kit, particularly with the vacuformed pieces. However, it offers the representation of a very real diorama base without the weight of a resin casting. For transporting to shows and contests, this is a very real advantage. The most significant challenge for the builder, however, is the fragility of the staircase, for which a solution must be planned well in advance.

Many thanks to MiniArt for the kit and a very instructive build!

Front and back view of vacuformed walls prior to assembly