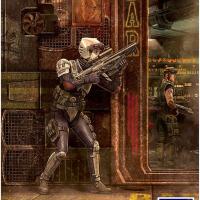 For some time Master Box has been exploring an up-to-now largely ignored area in the mainstream modeling fraternity - science fiction figures - through their "Spaceport - At the Edge of the Universe - Strange Company’s Adventures" series. Up until now, the action centered mainly around a rogue’s gallery of characters in a sleazy cantina somewhere on the fringes of the law and known space. Laurie adds an interesting potential element of additional trouble as she is one of two new figures who are clearly intent on raiding the cantina, although I do find myself wondering who her target might be.

As with most of the figures in this range, she comes on a single gray sprue with a limited number of parts. Assembly is quite straight-forward with only a little filling needed around the shoulders. I chose to lower her arms slightly to offer a better view of her face. That really is an AWFULLY big gun!

One of the advantages of SF models - especially those not linked to a mass media program or movie - is that you’ve got virtually infinite options for finishing. Examining the box art, I was not overwhelmed with the relatively dull costume the artist had conceived for Laurie, so decided to spice things up a bit, adding a semi-urban camo finish to her undergarment and coloring her armor in a contrasting tone. Obviously, there is no limit on schemes so have a good time!

As I do intend to eventually create that cantina scene with lights and the bit, I wasn’t quite sure how to add Laurie into the diorama I had planned. Fortunately, she is generic enough that she can be used in almost any futuristic battle scene you might want to put her in. I’ll be including her in a small extraterrestrial "bug hunt" dio I’ve been thinking about for some time.

All in all, Laurie is a very simple build with lots of potential. I’ll be curious to see just how far Master Box intends to expand this genre and where they might eventually wind up. Fun! As always, my thanks to Master Box for leaping into new modeling territory like they’re doing and to IPMS/USA for a chance to add this lovely piece to my growing SF story collection.