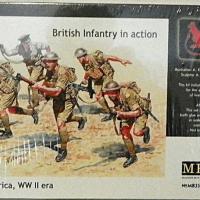 Master Box continues to release some really nice and different figure sets. These rests are very different than other sets on the market and usually very “in action” type poses. They also make a series of dual sets. These are designed to be easily made into a combat action series of figures. On their website, this is listed as #2 which means the German figures should be #1. The only issue is that there currently is no #1 set. There is however, an Italian Infantry in Africa set #1 and this must be the set to be used in conjunction with the #2 set.

The set comes with five figures. All the figures are in running and assaulting poses. You get four infantrymen and one commander figure. The two infantrymen with rifles are designed to be assembled with their bayonets attached to the rifles. The commander figure comes with two different options for the right arm placement. The Thompson machine gunner is exceptionally neat. He comes with the option of three different magazines. You can use the round drum, large capacity or small capacity clip. All come with a variety of kit and additional items.

The only downside I have about these figures is the lack of crispness. Though these figures are a very welcome addition to the plastic figure world, they are not of the quality standard that recent figure kits are. They have an old school Tamiyaish look to them. The poses and different figure sets are really nice but the details (flaps, buttons, folds) all seam slightly mushy. Luckily, the figures final outcome is based on the figure painter. I personally stink at figure painting (mostly the faces) but I have seen these figures painted and they end up looking absolutely gorgeous completed and painted on the Master Box website. That just makes me want to become a better painter of both model kits and figures.

I want to thank Master Box for releasing so many different figure sets that will accent many modeler’s models and dioramas; Dragon USA for providing the review sample, and IPMS/USA for posting this review to allow fellow TreadHeads and figure modelers to know about recent releases. Have fun…build some British Infantry figures with “In Action” poses.

Figures attached to sprue
Previous Next