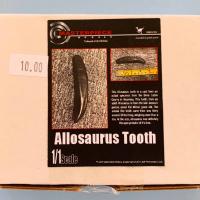 Allosaurus is a genus of carnivorous theropod dinosaur that lived 155 to 145 million years ago during the late Jurassic period. The name "Allosaurus" means "different lizard" alluding to its unique concave vertebrae (at the time of its discovery). It is derived from the Greek allos ("different, other") and sauros ("lizard / generic reptile"). The first fossil remains that could definitively be ascribed to this genus were described in 1877 by paleontologist Othniel Charles Marsh. As one of the first well-known theropod dinosaurs, it has long attracted attention outside of paleontological circles. Indeed, it has been a top feature in several films and documentaries about prehistoric life.

Masterpiece Models released this 1/1 scale Allosaurus tooth and root in 2017. This replica is cast from an actual fossil specimen from the Bone Cabin Quarry in Wyoming (so called because the cabin was built using dinosaur fossilized bones). This tooth, from an adult Allosaurus is from the late Jurassic period, about 150 Million years old.

The kit comes in a standard end opening box that is ~5” x 3” x 1”. The tooth comes wrapped in bubble-wrap. The fossil tooth itself is about 3.75” long, but only about 1.375” is the tooth that you would find in the maw of an Allosaurus. The rest is the root of the tooth. I would recommend that you wash the tooth to remove any remaining mold release. There are very small mold lines present on the parts, but they are easily cleaned up with a #11 scalpel blade.

One of the fun aspects of this model is that you can paint her just about any way you wish. The color comes from the minerals that replaced the tooth during the fossilization process or leached into the tooth post fossilization. There are a wide range of other post fossilization factors that can change the color of a fossil. For example, cracks in the sediment running along the fossil, plant roots and animal burrows against the fossil, and even different sized substrates other than the normal sediment lying against the fossil can change the color on parts of the fossil. These complicating factors, and others, can give the fossil a beautiful multicolored appearance; it can give them a cloudy, speckled, and even a streaked appearance.

I began by cleaning up the fine mold lines. I drilled a hole in the base of the tooth root and inserted a K&D 1/16 brass tube. I intend on mounting it on a wood base. The rest is all painting. I base coated everything with Tamiya Fine Surface Primer. I sprayed on a coat of Tamiya Dark Yellow (TS-3) and then brushed on a series of Vallejo paints. First I brushed on a thinned coat of Model Air 71.006 Cam Light Green. I followed with a thinned coat of Model Air 1.036Mahogany. Up next was a coat of thinned Model Color 70.938 Transparent Blue. Finally I touched up with Game Color Wash 73.203 Umber Wash.

There really isn't any way to screw this one up from a color standpoint and the tooth itself is so much cheaper than the real thing. Speaking of real things, I have included a few pictures of one of few (some same one of four) “complete” Allosaurus skeletons on display in the world. Masterpiece Models offers a wide variety of unique models, but they do have an interesting line of fossil replicas. Check out the photo comparison of a Tyrannosaurus Rex tooth compared to the Allosaurus tooth!

My thanks, of course, to Masterpiece Models for coming out with this excellent replica and to IPMS/USA for giving me a chance to paint it.