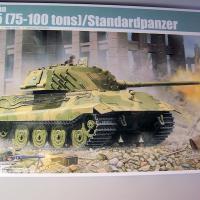 In November of 1944, the German armament giant Krupp proposed conceptual designs that would increase the armament of all Jagdpanzers and panzers currently in production. The idea behind the proposal was to permit the German vehicles to engage the enemy with the most effective armament with the minimum amount of protective armor. The E-75 "Standard panzer" was to be a heavy tank to replace the PzKpfW VIB Tiger II. The new vehicle would be armed with the 10.f cm KwK (L/68). This gun would have most likely required the redesign of the turret. The rate of fire would be reduced with the use of two-part munitions, and a second crew loader would be required, adding space for the additional crew. This vehicle never proceeded beyond the design proposal.

My internet search revealed very little about this vehicle. The Panzer Tracts No. 20-1 dedicated a single paragraph and one line drawing to the proposed vehicle. This was either good news or bad news, as we modelers often rely on references to add realism and accuracy to our builds. I was on my own, so to speak, with this project.

I have no idea what research or references Trumpeter may have used for this model, but the information contained within the Panzer Tracts publication reveals several differences in the appearance. It must be noted the Trumpeter interpretation of this vehicle does not include any secondary armament in the hull front, no muzzle brake on the main gun, single part gun tube, eighteen tooth drive sprockets and spare track hangers on the turret sides. The Panzer Tracts line drawing shows nine road wheels per side, whereas the kit has only eight. The kit has single road wheels and no doubles which is somewhat surprising as the up-graded Tiger II would have weight about 18 tons more and would have had a much higher ground pressure to distribute. In addition, the Panzer Tracts publication does not show any tools mounted, and the standard rounded front fenders as found on the Tiger II. Therefore, it would appear that with the available reference on this vehicle the model could deviate from the kit contents and still not be "wrong", or "right" for that matter.

Unfortunately for me my references did not arrive until after the bulk of the assembly had been completed, and therefore I had several challenges presented to me to create a model of this proposed vehicle as depicted in the Panzer Tracts publication. These revisions and additions were my decision and should not be interpreted as a fault of the kit manufacturer.

This is my first Trumpeter military vehicle build, and therefore I had no pre-conceived notions about the kit. I had built two of their 1/48th scale aircraft kits, and the quality and instructions for their aircraft and armor kits appear to be very similar. The molding of the parts is not as crisp as that found in the current Dragon or Tamiya kits.

The instruction is a 12-page book format. Page 2 shows the sprue layouts and notes that only two parts are not required in the build. Each construction step is presented in an exploded view, and all appear not to be complicated or confusing.

There are four major sprues included all molded in a light grey plastic. The turret top, hull top, and hull bottom are molded separately. A small sprue holds the periscopes. There is also a short length of copper wire that is identified as "brass" wire, along with a small PE fret and two runs of glueable vinyl tracks. All parts except the tracks are packages in a clear poly bag. The hull parts and turret top were placed in a separate cardboard compartment in the box bottom.

A small clear sprue has five periscopes, with one not being used.

There are no figures included

The running gear has the sprocket and rear idler along with sixteen road wheels. The suspension system appears to reflect some Henschell influence in the design. The tracks are a glossy vinyl, and mine had a bit of a twist that would need to be addressed before installation.

There are no decals included. The box art and painting guide has no markings shown of any sort.

Step 3 addresses the "cantilever" assembly. Four sub-assemblies are required per side of the vehicle. This is a three step subassembly using eight parts per sub-assembly. The two different axles are installed in the second part of this step, and when moving on to the third part the sub-assembly is rotated 180 degrees on the vertical axis. Take note of the small pentagonal raised plug on what becomes the top of the assembly. Care is required here to assure that the axles are installed in the right locations or a major potential disaster will occur.

The axles appear to be self-aligning, but after gluing each axel in place I used a 6" metal rule to confirm that all were in alignment.

I had a pair of spare nine-tooth sprockets left over from a previous Dragon King Tiger build, and a quick check showed they would fit the Trumpeter kit with a minor modification. The kit parts could be modified by cutting off every other tooth. If the modeler chooses to go this route, the kit tracks would then be incorrect.

I held off installing the road wheels, drive sprocket and rear idler until the painting was completed. I did replace the kit's armored exhaust covers with Dragon parts from the spare box. The Dragon parts had slightly better detailing. Common pins were used to represent the lift lugs on either side of the covers.

No problems with this multi-step task. The instructions offer PE handles for all the tool clamps, which will require the removal of the plastic loops. I did not use the PE for this effort as I felt the tools and clamps were adequate as is.

The copper tow cable had several kinks as a result of being looped during packaging. Carefully stroking the length of the cable with my fingers did eliminate the bulk of the kinks. I did note the very fine stands of copper wire had a tendency to fray, which would make it impossible to fit the ends into the tow loops. Each plastic tow loop must be drilled out to afford a good seating of the cable. I cut the cable to length with PE cutters and used Gorilla Super Glue to fit the cable ends into the loops. Overall, I felt the copper cables looked quite realistic when fitted with the tow loops, but they did require some TLC to assemble properly.

The Trumpeter kit did not include the front ball mount for secondary armament, and I thought that was odd. Referring to the line diagram in the Panzer tracts publication, I decided to add the front MG 34 ball mount. The spares box again came to the rescue. I carefully measured a Dragon King Tiger to locate the ball mount on the sloped front hull of the Trumpeter kit, and marked the location with a graphite pencil. Using a draftsman's circle template I determined the diameter of the opening required. Aligning the circle template I scribed the opening on the hull surface. Next, using a Dremel tool with a grinding burr I was able to remove the plastic within the scribed circle. After some cleanup, the spare ball mount fit quite nicely.

I replaced the camouflage loops located on the turret side with heavy gage copper wire. The spare tracks hangers were cleaned up after fixing to the turret sides and allowing the solvent to harden over night. I found these parts just too small to handle individually for removal of the molding lines. The kit included no spare tracks for the hangers.

I replaced the kit commander's cupola with a spare Dragon part only because of the slightly better detailing. The Dragon and kit parts fit together perfectly. I also added a muzzle brake to the main gun in compliance with the line drawing in the Panzer Tracts publication, which also resulted in a slightly more fierce appearance for the gun tube.

The decision on how to paint this model did not come easily. There are several possibilities: red oxide primer only? Dunklegelb only? Three color camouflage? Or the ambush scheme? Since the model did not include any secondary armament it would appear that the vehicle was intended to be a pure tank killer…………..laying in ambush. That was it!!

First, the completed model was given a fine coat of white sandable primer and allowed to thoroughly dry for 24 hours. Rustoleum Painter's Choice was used for this task. After this dried, any imperfections in the build were addressed.

The entire model when then airbrushed with a Tamiya blend of Hull Red and Red, thinned with 91% isopropyl alcohol to represent red oxide primer. I altered the blend slightly for the turret to reflect the fact the turret was manufactured remotely from the hull and suspension system by Krupp.

The first challenge with this kit was just opening the box. Talk about a tight fit! The poly bags containing the various sprues must be cut open with a very sharp knife. I found no fit problems, warped parts or gaps during the construction. The vehicle appears to be a "simplified" version of the Tiger II, equipped with a much heavier main gun. I compared the kit parts to that of an un-built Dragon King Tiger and the main components are mostly interchangeable. Some of the Trumpeter's kit fine details are a bit on the soft side and could be replaced with some effort by the builder, but that would be an individual choice. The kit does not contain the many small parts found in the Dragon kits, but the parts will result in a nice model of a war machine that never made it to production. Perhaps the greatest pleasure in building this kit would be the many potential camouflage schemes that also might have been.

I thank Stevens International and IPMS/USA for the opportunity to build and review this kit. This kit is recommended for those interested in building "paper panzers". The build will not tax your building skills, but will offer an opportunity to express your artistic skills with the many potential camouflage schemes.