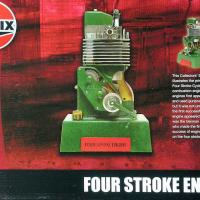 Airfix is releasing all sorts of interesting/strange subjects in their current burst of productivity and this is one of them. It's an old kit that originally dates from 1972, at one point was motorized, and is now billed as part of their Museum Collection. I selected it thinking it would be a fun diversion from my more "intense" projects. Wrong. This is not a simple build. You need to pay attention to what's going on and what goes where and, because it's a cutaway, what needs to be painted before you do anything. There are leftover parts when you're done that I can only assume were once part of the motorization, and some of the rest of the parts are similar to each other, so you need to pay attention to parts' numbers. Be careful during assembly, as some parts need to go together in a certain order and in particular orientations. In addition, since many of the parts are functional, you need to be careful in cleaning them, up as there are a lot of mold seams and some flash that, if not cleaned up, it will impair the function of the finished model.

Assembly goes pretty easily once you get started. Fit is good, considering the age of the kit, but, as I said above, this isn't a weekend quicky build. Many major components are in halves which require seam filling, and the interior parts need attention before you can assemble the outer parts, which then require seam filling and painting, so it all has to be done in stages that can't be rushed.

When completed, if you turn the provided crank, the crankshaft turns, the piston rises and falls, and a series of gears open and close the valves. Pretty cool, actually. However, it would have been nice if Airfix had called out the parts by name as well as number so you knew that part such-a-number was a left handed widget and maybe an explanation of what a widget does. As is, if you don't know engine parts, you'll have no idea why a certain part goes in a particular place and acts the way it does.

When completed, the model is pretty impressive. It measures 8"x4"x4" and does illustrate the functioning of a four stroke engine. This is one of those kits you'd like to think would be good for a science class as a visual aid or as a science project. As a visual aid, it would be good for a smaller group or class, but its size limits its use in a larger group and the delicacy of the mechanism would not stand up to the ham-fisted attention it would no doubt get. As a science project, this kit may be a bit much for a younger modeler, and remember, there is no information on how a real engine works. However, with a lot of adult assistance and additional information, it could be a good learning experience.

Thanks to Hornby America for providing this sample and IPMS/USA for giving me the chance to review it.