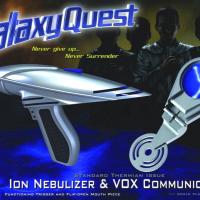 My 11 year old son is a big fan of space and science fiction, so I thought this would be an enjoyable model building exercise for him. I'm also planning to put some simple electronics inside the Nebulizer (at a later time) that will tie some lights and sounds into the trigger.

Here is Andrew's review of the kit:

The Ion nebulizer and VOX communicator was an interesting set, fun to build and rather easy too.

I started on the VOX communicator first, and it took me about half an hour to build. It took me a few tries to get the spring in the exact position, and I had to pop it open a few times to get it to work right. Then I started the construction of the Ion Nebulizer, putting the trigger mechanism in first (which also took a while to position right, due to the springs popping out) and the put both halves of the handle together. For a while, I left the barrel un-glued so I could put the lights and transparent blue pieces in. The construction of the barrel went rather smoothly, except for a few times having the front cylindrical piece falling out. We waited a while and painted it and the communicator Tamiya chrome silver.

Me and my dad are planning on putting some LED's and speakers in the blaster, so I am leaving the handle to where I can re-open it, therefore connecting the lights and speaker to the trigger. To anyone building this set, for screwing the handle together, I recommend a very small Phillips screwdriver. I had trouble finding one at my house, but when I found one it was the just the right size. For the trigger, I'd suggest having someone to hold it down while you're putting the trigger in, otherwise you'll have the spring pop out and hit you in the eye. The one in the VOX communicator hinge is a little easier, but you'll still probably need some help.

This is a picture of me pushing the spring in so it works. I was surprised how well it worked, because I was expecting it to go slow, sort of bogged up. Just be sure to figure out the button is on the back before breaking the restraining tab, like I almost did.

In conclusion, I thought this was one of the best kits I have built, and thanks goes out to IPMS USA and Pegasus Hobbies for the sample model kit. I hope that sometime I get another chance to build some of these kits.

Most of the assembly can be done with just a little glue and the supplied screws. As noted, we'll be doing more work on this later and have accommodated the need to open the handle and body assemblies up again. Where Andrew had some trouble with small parts fitting well and staying together, we used some Tenax to secure the joins. I only had to help out a few times, mostly with the working portions of the build (trigger and hinge assemblies), otherwise Andrew managed to get both kits together in a matter of two evenings (after homework, of course).