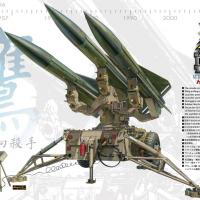 This is what the website Army Recognition has to allow about the Raytheon Hawk Missile: The HAWK (Homing All the Way Killer) MIM-23 is an all-weather low to medium altitude ground-to-air missile system developed and designed by the American Defense Company Raytheon. The HAWK semi-active radar seeking medium-range SAM system commenced development in 1952 with the US Army awarding a full-scale development contract to Raytheon for the missile in July 1954. Northrop was to provide the launcher and loader, radars and fire control. The first guided test firing took place in June 1956 with the development phase completed in July 1957. Initial Operational Capability (IOC) of the Basic HAWK, MIM-23A, took place in August 1960 when the first US Army battalion was activated.

Follow the link to a video, via Critical Past, of a Hawk missile blowing a QF-80 drone to smithereens.

(Technical Note: Smithereens is a technical term for lots and lots of little pieces.) Video of Launch

There have been a number of scale models produced over the years of this cold-war era missile system.

The first one I recall was a 1/40th scale kit from Adams Models. That was followed by Renwall, Revell, Life-Like, Crown, and a 1/87th scale version from Trident. Adams also issued a Hawk missile transport helicopter, that was later re-issued by Life-Like. Even Hasbro got into the mix with a G.I. Joe action figure version. Most, if not all, of these kits, suffer from old age and when found can be either pricey or just downright clunky. (Technical Note: Downright clunky is a technical term for a piece of junk.)

The Hawk has always been one of my favorites. Having built several of the available kits at one time or another, it came as a great surprise and delight that AFV Club was releasing a new 1/35th scale US MIM-23 Hawk for my (and your) modeling enjoyment.

The kit has 238 parts in olive drab plastic on seven sprues. There is a separately wrapped box that contains the main body of the launcher, two black vinyl tires, and a bit of tubing for the M-192 launcher. AFC Club includes a small fret of photo-etch for the cooling inlets on the launcher and a decal sheet that contains a plethora of warning stencils, placards, and markings found on the prototype launcher and missiles.

The twenty-page instruction booklet outlines the twenty-three steps needed to complete the model. Only three of those steps involve the missiles. And one of those steps is placing the finished missiles on the launcher. So, you'll be spending the bulk of your time on the very detailed launcher.

There are full-color, decal placement markings in the instructions for four versions of the MIM-23 HAWK. This being an AFV Club release you also get an 8x11 inch glossy Hollywood-type print of the box art, suitable for framing.

An added bonus with the decals is that the U.S. Army is split in two horizontally to aid in placing them on the missile. My review kit also had an additional sheet of decals that I can only assume are for the missile fins. (And by extension, an overseas market.) Those markings include some Asian script lettering, two types of markings for Taiwan, and an unidentified set of (what look like) unit badges.

The launcher may be built either in transport or emplaced mode. You'll need to decide which you'd prefer before you begin as the first construction step involves some specific parts which apply to either mode. There are a number of other parts needed throughout the build for the particular model you've chosen. AFV Club has thoughtfully designated those steps in the assembly instructions with icons.

Construction of the kit is pretty straightforward, just exercise some care as you follow along with the instructions. It should be noted that the kit is in scale so a number of parts are a bit fragile. If you're as hamfisted as I, do be careful. You might just end up breaking or bending a few of the parts. Case in point are the handbrakes (part # C26/C27) on the body of the launcher. There is a delicate brake line that runs from the brake mechanism to the axle. I managed to break this piece several times, gave up, and replaced that molded line with some thin wire.

To help with small part overload, AFV Club has broken down construction into three areas: the base of the launcher, the launch rails, and finally the missiles. This sequencing helps avoid the frustration that I sometimes experience when building a model with oodles of small parts. Several assembly steps do involve a somewhat tricky fit and AFV Club has included a picture of the actual launcher to aid in that placement. Very helpful.

The modular nature of the build might also come in handy when it comes to painting. With all the nooks and crannies, particularly on the launcher, choosing to paint the different sub-assemblies separately might just help with a thorough application of color on all the various components.

As mentioned earlier, most of your build time will be spent on the launcher as the missile assemble only involves two steps. There are nine parts for each missile. The main body of the missile has a seam running down its length. That seam is conveniently hidden by a separate part. There is a nice detail at the rear of the missiles as well. A small part fits into the rear of the missile that represents the nozzle of the boost motor. Very cool! AFV Club also includes two different styles (parts A14/A15) of guidance fins for the missiles. Part number A14 represents the guidance fins used on the missile early in its deployment. Most later types used fins represented by part number A15. The launcher control unit may also be displayed either closed (stowed on the launcher) or opened on a small tripod. You will need to provide your own control cable. Just be sure you ”don't push the death button.”

Anyone with building experience shouldn't have any problems with this kit. Although this kit has an inordinate number of itty bitty parts AFV Club does provide a few extras here and there. Which in my case was manna from heaven as I only managed to lose three or four parts to the carpet monster!

As cool as this kit is novice builders might wish to reconsider or seek out adult supervision. Nevertheless, AFV Club's HAWK MIM-23 will have you Humming All the Way to your own Killer model. (insert groan here!)

My thanks and appreciation to AFV Club for the review copy.