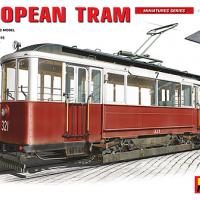 After scratching my head for quite some time I’ve finally came up with a plan to paint and assemble the main parts of the passenger cabin and move forward on the whole plan to complete this model.

First paint and assemble the passenger benches (described in Part 2). Then dry fit and glue the cabin sides to the boarding area sides. That would create two main lateral sides. Mask and paint the sides to your desired color.

Then paint the cabin bulkheads/division from the boarding area, but don’t bother with the clear parts yet.

Once you are done painting all those parts, then glue the passenger benches to the bottom part (from part 1) and use the pre-assembled sides and bulkheads to form the passenger cabin. Once all of this is glued and set you should have a square and true passenger cabin, which would be the foundation of the final assembly. With the cabin completed, you can add the remaining pieces to finish the passage cabin, all of them from the opening where the top would be.

Note that the clear parts have not been installed and from this point on, you can continue the assembly, apply clear coats, decal, etc. and not have to worry about masking the clear parts. The whole idea here is to assemble the sides and the driver stations but leaving the top as a removable part so the clear parts can be added at the very end of the assembly.

The assembly of the top is actually quite straightforward and I would recommend using a flat surface to glue the top halves to ensure there is no misalignment between them. I ended up with the top being a bit “crooked” and I had to add a few strips of plastic to the sides to get a good fit with the tram body. Make sure you dry fit the top to the main assembly. You might find that you need to do some sanding of the passenger cabin bulkheads to get a good fit. I know I did.

The driver stations were relatively simple to assemble, but there were some very small thin pieces and a handful of them broke when I was removing them from the sprue. I choose that if a piece would be missing in one station it would be missing in the other one too, as to make them both look the same. The end result, once painted and dry-brushed actually looks very good and despite having a few pieces missing almost nobody would be able to tell.

At this point I was virtually ready to do the final assembly, but I thought about adding a driver figure. I’ve modified an ICM figure from the “Stalin & Co” set to become a Tram driver for it. Once the driver was completed, I’ve spent many hours dealing with a lot of final pieces, most of them related to the doors and handles, and the electric pick up in the roof.

Now I was ready for the actually final assembly and I’ve spent about 4 hrs working on the clear parts. The fit of clear parts is outstanding, but there are over 40 clear parts and you need to clean up all the attachment points to get a good fit. Considering how many windows the tram has, time spent here is time well spent.

After all this work, I couldn’t resist and actually customized my model, so I added billboards from the late ‘40/early ’50 and I situated the tram in Turin (Italy) as I spent some time living there. My final detail was to add billboards (in Italian) for the movie “A streetcar named Desire” (Un Tram che si chiama Desiderio”)

It took me about 180 hours over 10 months to complete then 700+ pieces model. I admit not all of those hours were actual construction; a fair amount went into planning how to paint/assemble the model, fixing mistakes and doing research on the billboards and modifying the ICM figure. But regardless the added components, you can see this model is a sizable undertaking, both in time and in will to muddle through many steps to reach conclusion.

I would recommend this kit to the experienced modeler that is capable of mustering high levels of concentration and commitment to get through the construction and finish of the model. But if you do, you will be rewarded with a very unique model and a sense of accomplishment no other model has ever provided me with.

I would like to thank MRC and IPMS/USA for the review sample. I would like to apologize for the extensive amount of time it took me to complete this review model, too.

A more extensive build article is being written for the IPMS/USA Journal.